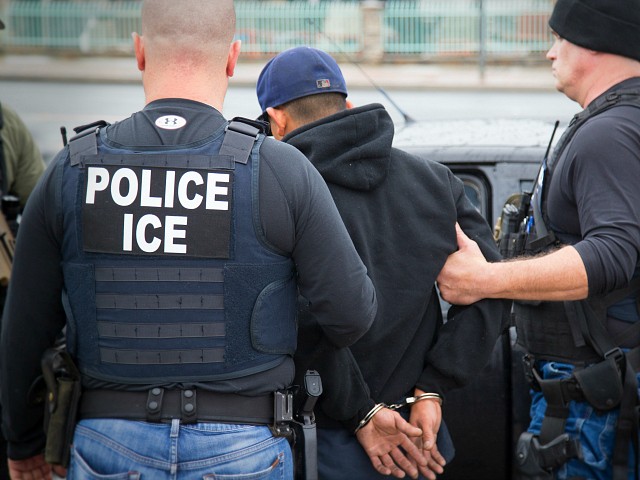 The goal was sketched in a statement from Democratic Rep. Lucille Roybal-Allard, who is part of the 17-member committee now trying to draft a 2019 budget for the Department of Homeland Security. She represents a Los Angeles district where almost 90 percent of the population is Latino, and which likely includes many illegal migrants who face possible deportation.

… Right now, the Trump administration is pursuing an out-of-control deportation policy focused on removing immigrants with no criminal records, many of whom have deep roots in their communities. This approach is cruel and wrong.

President Donald Trump says the Democrats do not want to deport violent migrants.

The Democrats do not want us to detain, or send back, criminal aliens! This is a brand new demand. Crazy!

Roybal-Allard insisted the curbs would not prevent the deportation of violent criminals.

Claims that this proposal would allow violent criminals to be released are false. The Democrats’ proposed cap will ensure that the Trump administration adheres to congressional funding decisions and targets violent felons and other people who pose security risks for deportation, instead of pursuing reckless mass deportation policies that actually make us less safe.

The Democrats have adopted a risky policy, said Mark Krikorian, director of the Center for Immigration Studies.

If the Democrats lock this into the budget, the word is going to keep spreading” among the millions of foreigners who want to work in the United States, said Mark Krikorian, director of the Center for Immigration Studies. “You don’t think that Pakistanis and Vietnamese and Congolese are going to get the word?”

Already, a Gallup survey shows that five million people from Central American are trying to decide if they should migrate to the United States in 2019, he said.

Pro-migration activists pretend migrants are helpless recipients of progressive charity. But migrants are rational & will go to US if Dems & biz force open the border. So Gallup warns that 5 million people are calculating the gains & risks for a 2019 move: https://t.co/nGUr3Q0dXk

Many Americans simultaneously want to oppose the border wall, welcome migrants and have tougher border security, he said. “When 100,000 migrants show up one month and the next month shows 150,000,  those contradictory goals will come into focus,” he said.

Experienced Democrats recognize the political risk, he said. “They understand this is a danger for them, which is why they keep talking about those [migrants] fleeing danger or being refugees.”

“At some point, the number will get to a level that [voters] are going to react strongly against it,” Krikorian said. For now, ‘the Democrats have no interest in any concessions whatsoever, and they don’t see to be paying a cost yet. Things have to get worse before they pay a political price.”

The Democrats’ proposal included a new limit on detention beds for immigrants picked up not at the border but in the interior of the country.

Democrats wanted to cap that number at 16,500, which they said is around the level of interior detentions in the final years of the Obama administration, although it’s fewer than the number currently detained under the Trump administration’s enforcement policies.

The Post added that 48,747 migrants were in detention on February 10.

“I’m not confident given the Republicans’ track record that they will hold the line on this,” said Krikorian. He added: “Republicans, in general, are supine in the face of Democrats’ demands.”

Trump’s focus on the wall could distract him from the Democrats’ welcome for migrants. “It is not implausible he will signal to the conference committee that he is willing to accept these very damaging conditions on detention if they get a little bit of wall money. But the limits on detention will cancel out any benefits from the wall, at least partially if not entirely, because they are only talking about 150 miles of new wall.”

GOP legislators do not entirely oppose a cap but are demanding a higher limit on deportations, according to the Washington Post:

Republicans want to exclude a range of immigrants from the cap. These would be people convicted of, or charged with, a variety of crimes, ranging from violent felonies to misdemeanor drug offenses.

Democrats said that would make the cap toothless, because it would allow ICE to round up numerous people without criminal records and also hold an unlimited number of people who, in some cases, have only been charged with misdemeanors.

An administration official told The Hill that in a leadership staff meeting Saturday Democrats said they wanted to reduce the number of beds Immigration and Customs Enforcement (ICE) has available for detained immigrants from 38,000 to 16,000.

“This is ‘abolish ICE.’ That’s what it is,” the official said, characterizing the Democratic position and warning that Republicans are about to “walk” away from the negotiating table.

Officials normally put a higher priority on deporting violent criminals illegals and illegals caught driving while drunk. But many of the criminal migrants are aided by lawyers eager to slow deportations. If the Democrats can shrink the number of detention beds, then enforcement officials would be unable to deport the many lower-priority economic migrants who are hired instead of Americans.

The cap on detention beds would not “Abolish ICE,” as sought by some Democratic legislators, but would freeze ICE and prevent it from reducing the population of at least 12 million illegal migrants. The plan would create an invisible bureaucratic amnesty for economic migrants who do not commit violent crimes — but who also drive down wages and spike rents for Americans.

For example, the median household income in Roybal-Allard’s migrant-heavy district was just $47,190, including government-provided benefits. Nationwide, median household income in 2017. was roughly $60,000. The “median” term shows the mid-point: Half of the households in an area earn above the median number, and half earn below the median number. this means half the households in Roybal-Allard’s district earned less than $47,1190 in 2017.

Also, the number of migrants who are jailed for crimes — especially for drug sales — far exceeds their percentage of the population:

Study: Illegal Aliens Up to 5X More Likely To Be in Prison Than Americans https://t.co/qgLT1V7je7 via @BreitbartNews @JxhnBinder

Pres. Trump suggests he may drop “Hire American” policy & begin importing workers for a “Hire Cheapest” policy. If so, biz will stop hiring young/sidelined Americans & stop raising wages. Re. 2020: Why would Americans vote for a Pres who cuts their wages? https://t.co/P4oF7E9U0v