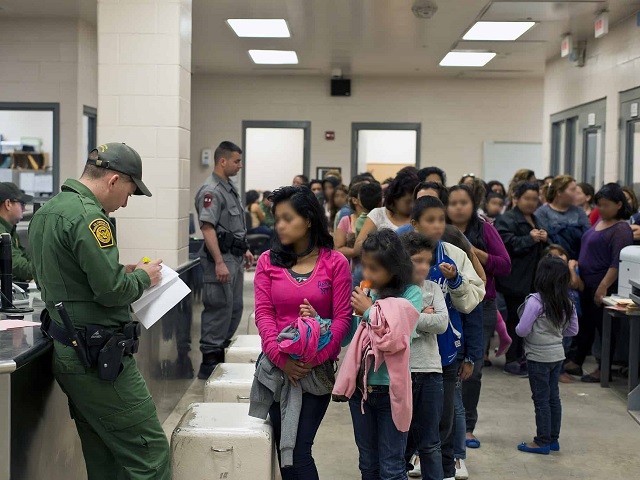 “We’re willing to put [up] the money,” the Vermont Senator said at the June 11 hearing at the Senate’s judiciary committee. But, he added:

Now whether a supplemental gets done is up to the administration. If they continue to block bipartisan legislation, nothing happens. I hope the Republicans will finally realize we have to do this, Republicans and Democrats, together … We want long term solutions.

The May 1 funding request sought $3.3 billion to process and temporarily house many thousands of so-called “Unaccompanied Alien Children,” plus $2.2 billion for border agencies to register, shelter, and transport the huge flow of migrants as they walk through the catch-and-release loopholes at the border.

“The border is at its breaking point — we need funds,” said Kevin McAleenan, the acting secretary of the Department of Homeland Security.

GOP Senators are expected to push for Senate passage of the legislation mid-June. But the package still needs approval from at least seven Democratic Senators, plus the House’s Democratic leadership.

The legislators at the hearing did not debate the gains from President Donald Trump’s diplomatic deal with Mexico. His deal promises to end the migration by preventing migrants from getting U.S. jobs to pay their smuggling debts.

In contrast, the political priorities set by Democrats would likely accelerate the movement of Central American populations into blue-collar Americans’ workplaces, schools, and neighborhoods. The huge inflow — perhaps one million people in the 12 months up to October — provides an economic stimulus to cities run by Democratic mayors and to companies run by Democratic donors.

One of the Democrats’ priorities is taxpayer funding to hire lawyers for the illegal immigrants in the United States who hire coyotes to accompany their children up to U.S. border agencies.

A 2008 law requires the government agencies to complete these coyotes’ contracts by relaying the “Unaccompanied Alien Children” from the coyotes at the border up to the shelters run by the Department of Health and Human Services. Once at the HHS shelters, the children and youths are next relayed to so-called “sponsors.” Many of the sponsors are the illegal-immigrant parents who hired the coyotes to accompany their UACs to the U.S. border.

“Most children are being released to parents, but parents are here unlawfully,” McAleenan noted, adding that he wants legal authority for his agencies to share information about the identity of the parent “sponsors.”

The requirement that taxpayer-funded lawyers be provided to the UAC migrants is included in a bill introduced June 5 by California Sen. Dianne Feinstein. “This bill includes a key component of [Democrat] Sen. [Mazie] Hirono’s bill, which provides counsel for unaccompanied children,” Feinstein told the hearing.

The Central American families are fleeing “violence, abuse, and poverty,” she claimed, despite many statements from many migrants that they are hoping to get low-wage U.S. jobs, send their children to American schools, and get healthcare treatments.

Leahy argued that Democrats are willing to provide funding to help the Central American migrants gain “refuge” in the United States.

Democrats downplayed the economic incentives for migrants to walk through the establishment’s catch-and-release loopholes into the United States, and they sought to blame the migration on President Donald Trump’s pro-American policies.

“We have learned that we cannot count on this admin to work on rational immigration policy,” said Durbin, who has pushed for multiple amnesties, and was a participant in the disastrous 2013 “Gang of Eight” amnesty and cheap-labor bill.

Democrats, including Durbin and Sen. Amy Klobuchar, argued that the migration problem would have been solved by the 2013 Gang of Eight bill.

The bill added tens of billions in extra funding for the border agencies. But it did not close the catch-and-release loopholes and it invited so many millions of foreign workers into the labor market that it would have shifted more of the nation’s annual new income from employees to the Wall Street investors.

“The rate of return on capital would be higher [than on labor] under the legislation than under current law throughout the next two decades,” said a June 2013 report by the Congressional Budget Office, titled “The Economic Impact of S. 744.”

Republicans pushed back against the Democrats’ opposition to border funding and border reforms.

“We’ve seen no willingness on the part of our Democratic colleagues to meet us halfway,” said Texas Sen. John Cornyn. The migration “is just getting worse and worse as Congress sits on its hands” instead of passing legal reforms to block the loopholes. Legislators “have been AWOL, and that is shameful.”

“They need to step up because even The New York Times said ‘Give Trump the money,”’ GOP Leader Sen. Mitch McConnell told a Tuesday press conference.

This policy of flooding the market with cheap, foreign, white-collar graduates and blue-collar labor also shifts enormous wealth from young employees towards older investors, even as it also widens wealth gaps, reduces high-tech investment, increases state and local tax burdens, and hurts children’s schools and college educations. It also pushes Americans away from high-tech careers and sidelines millions of marginalized Americans, including many who are now struggling with fentanyl addictions. The labor policy also moves business investment and wealth from the heartland to the coastal cities, explodes rents and housing costs, shrivels real estate values in the Midwest, and rewards investors for creating low-tech, labor-intensive workplaces.