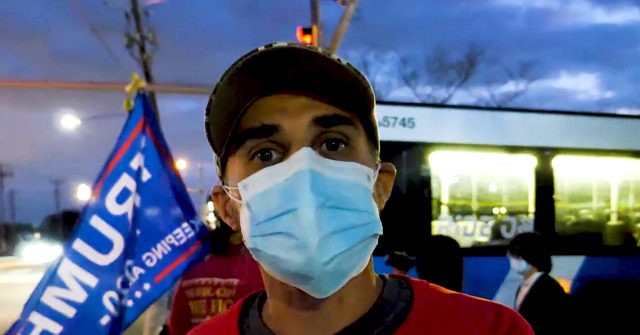 Kevin, a supporter for President Donald Trump from Scranton, PA, told Breitbart News on Monday that he would risk being reinfected with COVID-19 in order to vote in-person for the president in November. He offered his comments at a rally in support of the president outside Walter Reed National Military Medical Center in Bethesda, MD, where Trump was being treated for COVID-19.

Kevin described the Democrat push for vote-by-mail as “bogus,” “a hoax,” and an endeavor to increase “voter fraud”:

The vote-by-mail is bogus. I’m going to be voting in person, and I had COVID. I don’t care. I’ll take my mask off and vote in-person and take the chance of getting COVID again, even a third time.

I’ll tell you why, because the Democrats are trying to do anything they can to stop the real voting, the people going into voting booths. And the only reason they’re trying to do this is because they can possibly control the post office, or try to control the outcome with the voting and throw away the [mail-in ballots].

As a Democrat, I will vote for Trump, and until my Democrat Party has somebody worth voting for, I will never vote for another Democrat again.

“The Democratic Party cannot understand that the people — that us, here — are fighting for the American way of life,” Kevin added.

Breitbart News asked Kevin of his departure from the Democrat Party.

“They veered off on the left,” Kevin replied. “They veered off out of the American values [and] out of the American way. Trump is pro-life. Democrats, we all know what they want. They’re not pro-life, at all. They’re not pro-American. I’m pro-American, and I’m a JFK Democrat, as you would say, and I love my Democrat Party but not when they’re they’re acting like this, and they’re acting like children.”

Kevin continued, “My Democratic Party has turned to evil.”

Kevin recalled Project Veritas’s recent exposure of ballot harvesting in Minnesota for the benefit of Rep. Ilhan Omar (D-MN) as an illustration of Democrat-driven voter fraud.

Kevin remarked, “We need another four years of our president. We need another four years of Donald J. Trump and his family.” He praised Trump as the best president in American history. He added, “We needed somebody outside the political realm. We needed somebody that’s a businessman because you’re putting somebody that has the heart. And the reason why Trump is the greatest is because he can’t be bought.”

“You can’t buy my vote,” concluded Kevin. “My vote as a Democrat is for Trump.”