A Connecticut Democratic member of Congress sent out an email letter to voters in his district in which he said it has been “standard procedure for decades” to have Supreme Court nominees with new allegations against them investigated by the FBI. 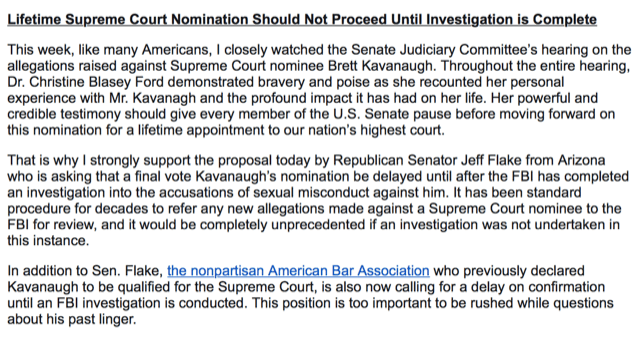 U.S. Rep. Joe Courtney wrote to voters in his district Friday that Christine Blasey Ford’s “powerful and credible testimony should give every member of the U.S. Senate pause before moving forward on this nomination for a lifetime appointment to our nation’s highest court.”

That is why I strongly support the proposal today by Republican Senator Jeff Flake from Arizona who is asking that a final vote [on] Kavanaugh’s nomination be delayed until after the FBI has completed an investigation into the accusations of sexual misconduct against him. It has been standard procedure for decades to refer any new allegations made against a Supreme Court nominee to the FBI for review, and it would be completely unprecedented if an investigation was not undertaken in this instance.

Thomas Jipping, deputy director of the Edwin Meese III Center for Legal and Judicial Studies, observed at the Daily Signal that, first, Democrats have already made clear their motivation for another delay: they hope the continued cloud of controversy over Kavanaugh will defeat his nomination and hold the vacant seat on the Supreme Court open until, presumably, they win control of the Senate.

Secondly, Jipping pointed out the demand for another FBI investigation “is not valid and based on a complete misunderstanding of the bureau’s role.”

“Kavanaugh’s opponents want people to think that the FBI is on standby, ready to run down all the leads and figure out what really happened,” he wrote. “That may be what a law enforcement agency does in the criminal justice system—as seen on TV—but not in the confirmation process.”

In fact, as CBS News recently described it, the FBI “conducts a background check at the request of the White House, mainly to determine whether the nominee would pose a risk to national security interests of the United States, according to the Justice Department.”

That has already been done. It’s worth noting that this “full-field” FBI investigation has been conducted every time Kavanaugh was hired or appointed to a significant government position. Six times between 1993 and 2018, the FBI went talking to people about Kavanaugh. Six times, all after the incident that Ford alleges, the FBI never heard anyone even whisper a word about sexual misconduct.

To present a truthful account of the FBI role in allegations against Supreme Court nominees, Courtney would have to direct voters in his district to the words of another Democrat – former Vice President Joe Biden – who, as the U.S. senator from Delaware in 1991, told the Senate Judiciary Committee twice that an FBI investigation was worthless as a determination of the facts:

The last thing I will point out, the next person who refers to an FBI report as being worth anything, obviously doesn’t understand anything. FBI explicitly does not, in this or any other case, reach a conclusion, period. Period.

The reason why we cannot rely on the FBI report [is] you would not like it if we did because it is inconclusive. They say, ‘He said, she said, and they said.’ Period.

“So when people wave an FBI report before you, understand they do not, they do not reach conclusions,” Biden said.

“The mantra of ‘FBI investigation’ by Kavanaugh’s opponents is misleading in its purpose and has no validity,” Jipping continued. “The confirmation process is already structured and equipped to evaluate even unexpected allegations as they arise and will do so as, in Kavanaugh’s case, it nears a conclusion.”

Common sense request from the @ABAesq who endorsed Kavanaugh. The Senate and the country need an FBI inquiry before any votes take place. #KavanaughConfirmation https://t.co/ViXWpGTbCG

In his letter to voters, Courtney also cites the call for another FBI investigation from “the nonpartisan American Bar Association (ABA) which previously declared Kavanaugh to be qualified for the Supreme Court.”

However, Courtney failed to inform voters in his district that ABA president Robert Carlson is not a member of the organization’s Standing Committee on the Federal Judiciary – which reviews Supreme Court nominees and already gave Kavanaugh its highest rating – and the controversy within the ABA over Carlson’s call for another FBI investigation.

Mr. Carlson is not a member of that committee, and he is not supposed to speak for the ABA unless the legal group has made a policy decision. In this case he is trying to sandbag his own ABA colleagues. Paul Moxley, the Utah lawyer who chairs the ABA’s judicial committee, made that clear on Friday when he wrote to the Senate Judiciary Committee that Mr. Carlson’s letter “was not received” by his ABA committee “prior to its issuance.” Mr. Moxley added: “The ABA’s rating for Judge Kavanaugh is not affected by Mr. Carlson’s letter.”

In other words, Mr. Carlson is free-lancing for partisan purposes and the Senate should ignore him. For the rest of us, however, this is one more reason to bar the ABA from any judicial vetting. Some of us still remember the ABA’s shoddy treatment of Robert Bork and Clarence Thomas.

Similarly, in a statement sent to Breitbart News, Ronald A. Cass, Dean Emeritus at Boston University School of Law and President of Cass & Associates, PC, wrote:

I am, however, deeply disappointed to see the recent statement of the ABA’s President, who does not serve on this Committee and has no authority to speak for the Committee or the Association on qualifications of judicial nominees, calling for a pause in Senate proceedings on the Kavanaugh nomination pending further investigation.

The Standing Committee, which is the sole entity within the ABA charged with evaluating federal judicial nominees and conveying its assessments to the Senate, works in a bipartisan manner, takes its work very seriously, does thorough investigations and careful considerations. After a thorough investigation, it unanimously accorded Judge Kavanaugh its highest rating. To suggest, as the ABA President implicitly does, that it overlooked important information is both contrary to what is in the public domain today and disrespectful of the men and women who serve on the Standing Committee.

In a column at Breitbart News, Sen. Bill Cassidy (R-LA) wrote the delay afforded by another FBI investigation serves a political purpose.

“What Senate Democrats really want is more time to smear Judge Kavanaugh, regardless of the toll it takes on his wife, his daughters, and our country,” the senator said.

Democrats “have never been about getting the facts or finding the truth,” Cassidy asserted. “If they were, they would have alerted law enforcement months ago, as soon as they learned of the claims. Instead, they waited until the last minute to leak them in order to delay the vote.”