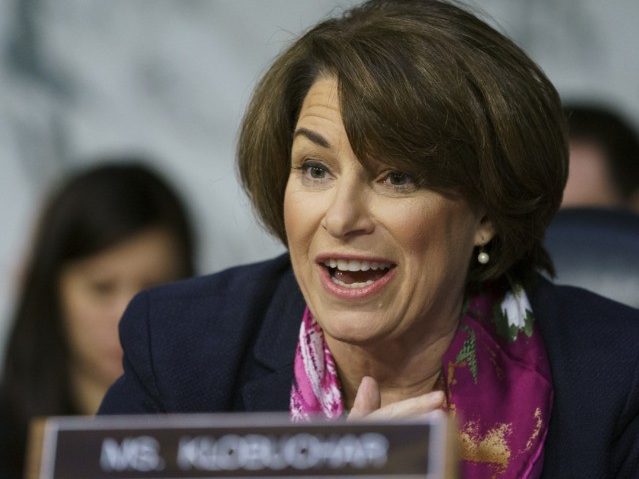 Sen. Amy Klobuchar (D-MN) officially announced her run for the 2020 Democratic presidential nomination at a rally held along the Mississippi River in her home state of Minnesota on Sunday.

As the snow fell, Klobuchar told a large group of her supporters:

Today, on an island in the middle of the mighty Mississippi, in our nation’s heartland, at a time when we must heal the heart of our democracy and renew our commitment to the common good, I stand before you as the granddaughter of an iron ore miner, the daughter of a teacher and a newspaperman, the first woman elected to the United States Senate from the State of Minnesota, to announce my candidacy for President of the United States.

Klobuchar used her announcement to call for unity among the American people.

“Let us cross the river of our divides and walk across our sturdy bridge to higher ground,” Klobuchar said to a cheering crowd.

“We are all tired of the shutdowns and the putdowns, the gridlock and the grandstanding,” Klobuchar said.

In her announcement, Klobuchar claimed communities are “worn down by the petty and vicious nature of our politics.”

The 58-year-old former prosecutor also called for a need to “heal the heart of our democracy and renew our commitment to the common good.”

Klobuchar faced scrutiny on Friday after three of her former staffers claimed she was an abusive boss.

She’s beloved in her state as a smart, funny and personable lawmaker and has gained national attention for her lines of questioning at high-profile hearings.

But some former Klobuchar staffers, all of whom spoke to HuffPost on condition of anonymity, describe Klobuchar as habitually demeaning and prone to bursts of cruelty that make it difficult to work in her office for long.

As she seeks to unseat President Trump in 2020, Klobuchar enters the race alongside several of her Democratic colleagues, including Sen. Kamala Harris (D-CA), Sen. Elizabeth Warren (D-MA), and Sen. Kirsten Gillibrand (D-NY).