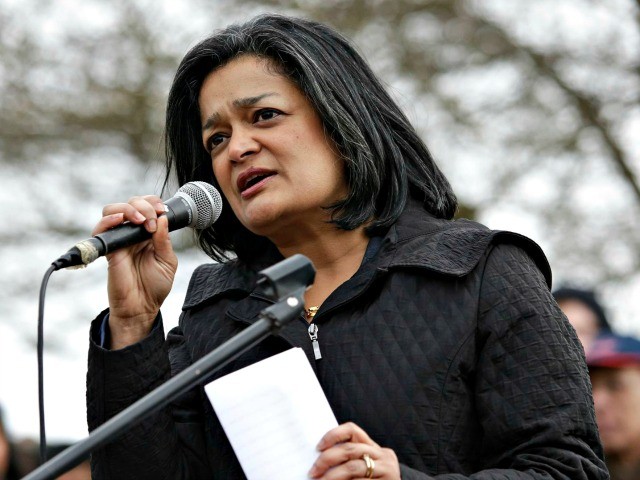 The editors of the New York Review of Books published Jayapal’s corporatist demand for more visa workers on December 3 under the headline: “A New Moral Imagination on Immigration.” She wrote:

The number of visas for nonagricultural workers (such as construction workers, housekeepers, or forest workers) is stuck at the 1990 level of 66,000 visas—even though our economy requires millions.

Jayapal also urged that immigration policies should meet the needs of employers, not employees, writing that “our immigration system should be updated regularly to prioritize certain industries that are seeing rapid growth and need workers.”

The Washington State representative’s plan to grow the economy with government-supplied labor mimics the elite-controlled 3,500-year-old caste system in her Indian homeland. Instead of recreating India’s caste system, however, the D.C. elite would provide lower-status visa workers and immigrants to elite investors who could then avoid paying higher wages to ordinary Americans. Jayapal’s plan would also prevent blue-collar Americans and legal immigrants from using labor shortages to raise their social status or to gain better working conditions or productivity-boosting machinery. She wrote:

… this is a roadmap forward: nimble [immigration] laws with strong worker protections would encourage more migrant workers to stay in the [foreign] homes they love while supplying our economic needs with their temporary labor.

In Jayapal’s diverse homeland, manual laborers are deemed “Shudras” or “untouchables” whose social status is kept below the inherited classes of priestly “Brahmins,” warrior and ruler “Kshatriyas” and merchant “Vaishyas.”

In Christian-derived America, however, legal workers are equal Americans in a level labor-market, whether or not they are born in the United States.

But the lives of Americans and their children should not be the primary concern of the American government, the Democratic Representative wrote. Instead, the United States must place the concern of migrants first because “a fair and forward-looking immigration system must be at the heart of America’s moral imagination.”

In fact, Americans and their children are just incapable of keeping the economy growing, wrote Jayapal, who was sent to the United States by her parents at age 16 and who subsequently jumped from visa to visa until she got citizenship in 2000. Jayapal wrote that “immigration has been the unique genius of America’s history and is necessary to the economic vitality of our nation.”

Immigrants — but not Americans or their American children — “built America and their successors continue to do so,” Jayapal writes. Opposition to immigration “is inextricably bound up with bigotry,” Jayapal insists.

Jayapal also favors the easy immigration of unskilled migrants, as well as of aging migrants who cannot work but who will likely rely on taxpayer aid, such as Medicare:

We should sing strongly the benefits of family immigration, which has been the bedrock of the US system since its founding—bringing us strivers of all kinds to fill jobs at every skill level. … think of grandparents taking care of grandchildren while parents work or of children taking care of aging parents.

Jayapal’s pro-migrant views are echoed by many leading Democrats, establishment pundits, and business leaders. For example, former top Democratic Sen. Harry Reid said migrants are the “lifeblood” of America, Democratic Rep. Joe Kennedy recently revived the Cold War claim that America is a “nation of immigrants,” while banker Jamie Dimon said that “we need these skilled individuals in America.”

However, Jayapal is still willing to support Americans as they are discarded by business in her tiered economy. She argues that a parallel set of welfare policies is needed to support yesterday’s Americans who are made obsolete as investors pick new migrants:

We also need a new set of domestic policies that address the problems of declining economic conditions for both American-born and immigrant workers. In industries that are undergoing structural change or decline, measures like retraining initiatives and new investment programs would help displaced workers find reliable new jobs quickly.

In contrast, under Trump, the labor shortage is forcing CEOs and investors to raise wages for the Americans who were sidelined under the pro-migration policies of President George W. Bush and Barack Obama.

Jayapal justifies her claim that low-wage visa workers and migrants are good for the economy by citing the recommendations from the pre-Trump, pro-amnesty, business-first administrations of Bush and Obama. From 2000 to 2017, Americans’ wages and salaries stalled as cheap immigrant labor helped keep the stock market climbing.

However, Jayapal declined to mention her support for foreign college-graduate migrants, such as the many Indian graduates in her Washington State district who have taken technology jobs sought by American graduates. In 2017, Jayapal sponsored a bill that would provide fast-track citizenship for roughly 300,000 foreign H-1B and L-1 visa-workers who are helping employers curb salaries for American college graduates.

Jayapal also offers a few rhetorical maneuvers to help her claim for a high-immigration, tiered society.

For example, she writes, the nation will be able to spend far less on immigration enforcement once businesses hire plenty of cheap foreign workers. “It’s important to note that with an underlying system of laws that actually works and meets the needs of our economy, we will dramatically reduce the need for enforcement.”

Advocates of large-scale replacement immigration must also deny they are for “open borders,” she says:

Our prescription for recapturing the moral imagination of immigration must be grounded in a few central principles. We must state clearly our belief that our nation has the right to control who comes in and out at our borders, and knock down the Republican strawman that any Democrat who believes in fixing the immigration system and calls for humane policies actually believes in “open borders.” That is a baseless slander and we should say so.

Jayapal’s vision of a tiered economy was applauded by David Bier, a pro-immigration advocate at the business-funded Cato Institute.

Overall, this is a pretty good vision for immigration. It is very light on particulars, but “an updated, orderly, and effective process for people to come to America, stay, and work here” is a great goal https://t.co/zYvIZpEhz9

The article was also endorsed by the director of FWD.us, a group formed by Mark Zuckerberg and other technology billionaires to preserve the supply of cheap labor and immigrant consumers:

Everyone should take the time to read this perspective on immigration from @RepJayapal https://t.co/ZKbaxe6D3b

The tiered society urged by Jaypal was also endorsed by various pro-migration groups, including America’s Voice, the university-run Presidents’ Immigration Alliance, Human Rights First, Move On, and the National Immigration Forum which represents the interest of cheap-labor employers.

“Terrific deep dive piece by @RepJayapal, a leading progressive voice in the House and an expert on the issue,” said Frank Sharry, director of America’s Voice.

“Our job is to tell the truth about immigration instead of cowering before falsehoods.”

On December 1, Jayapal visited the migrant caravan in Tijuana, Mexico, and helped several migrants jump the line for asylum seekers:

“It was a beautiful moment,” Jayapal said.