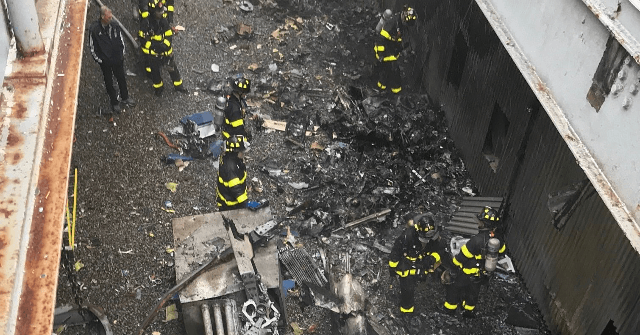 Several Democrat New York lawmakers are pushing for increased restrictions on helicopters flying around the city because it is just “too dangerous.”

Lawmakers are pushing to limit the number of helicopters allowed in the skies after a pilot died by crashing his privately-owned helicopter into a 54-story building in Manhattan on Monday afternoon.

“I truly, deeply believe that non-essential flight should be banned from New York City. It is just too densely populated. It is too dangerous. And there is absolutely no safe place to land,” Rep. Carolyn Maloney (D-NY) said shortly after the crash.

“We cannot rely on good fortune to protect people on the ground,” she added. “It is past time for the FAA to ban unnecessary helicopters from the skies over our densely-packed urban city. The risks to New Yorkers are just too high.”

Keith Powers, a Democrat who sits on the New York City council, told WPIX the helicopter crash is not an isolated incident and supported limiting non-essential helicopters from New York City airspace.

“And on a day like today, where you can see what the weather is like, the thing I want to understand next is why is someone allowed to be able take off,” he said. “Today especially if it’s a non-essential, non-emergency helicopter.”

Most tourists use privately-owned helicopters in New York City to get great views of the city skyline, and executives use the helicopters to move to other airports quickly.

Monday’s crash is not the only one to occur over the past few weeks. In May, a helicopter crashed in the Hudson River. Officials rescued the pilot, who was able to escape the crash safely.