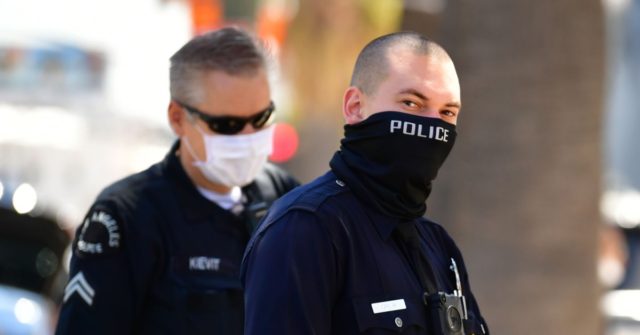 Spectrum News 1 reported the unit usually includes two police officers and has been there for the past two months.

“The private security detail infuriated some members of the force when Martinez became one of the council members to spearhead a motion to cut $150 million in funding to the LAPD’s budget,” Spectrum News 1 journalist Natalie Brunell reported Monday.

“Multiple LAPD sources confirmed the units were directed to provide 24/7 security beginning April 4 at Martinez’s home, almost always staffed by two officers. As of May 6, we’re told the detail decreased to 7 a.m. to 9 p.m. with roving patrol checks overnight.”

Neighbors, who did not want to appear on camera, indicated they felt safer having the police officers around.

“It’s kind of ironic. Here she is demanding $150 million be reallocated from the police budget, but yet she has security at her house by the Los Angeles Police Department,” he said.

McBride added the special protection for Martinez meant there was one less cop out to respond to emergencies from residents in the area.

“It’s disgusting,” McBride said. “For two officers in front of a residence since April, you’re probably over $100,000 of the people’s money.”

Brunell reported that Martinez’s protection detail was canceled the night she contacted Martinez’s office for a story.

#LATEST LA Council Pres. Nury Martinez, who introduced a motion to cut #LAPD’s budget by $150 million, had a private LAPD protection detail camped at her home from April to June. It was called off the night we called to ask her team about it. Full story coming to @SpecNews1SoCal pic.twitter.com/1lv5ctqQEC

A spokesperson for Martinez’s office said the detail was due to threats the council president had received, but McBride suggested that the units would still be outsidee their home if there were a real threat.

While one LA Councilmember was introducing a motion to cut $150 million in #LAPD funding, that official also had round-the-clock private security provided by the department at their home. @LAPPL calls it hypocrisy, adding it may have cost taxpayers around $100k. @SpecNews1SoCal pic.twitter.com/lrrRC65oj1

According to a recent report from the Cato Institute, only 16 percent of Americans favor defunding police departments, nine out of ten black, white, and Hispanic Americans oppose reducing the numbers of police in their communities, and a third say their community needs more police officers.