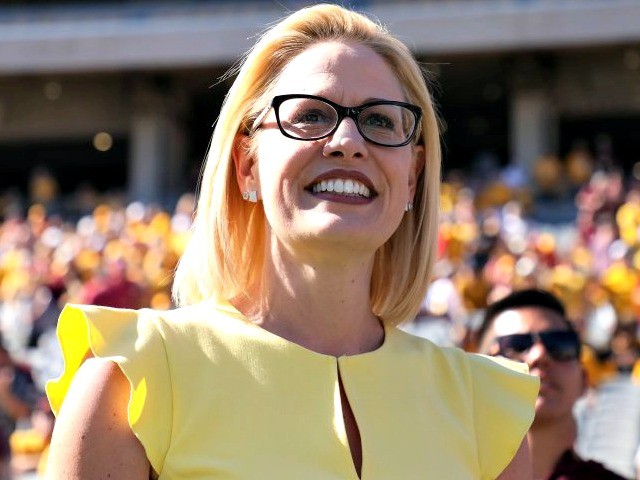 Republican Martha McSally showed an early lead in the race to replace Sen. Jeff Flake as one of Arizona’s two U.S. Senators, but after two days of vote counting, that lead flipped to Democrat Sinema. That lead widened as Maricopa County released batch after batch of vote results. As of Monday evening, Sinema had garnered 49.68 percent of the vote to McSally’s 47.96 percent, a difference of 1.72 percent and over 38,000 votes. Sinema had 1,097,321 votes to McSally’s 1,059,124 votes at the time.

The Associated Press called the race for Sinema late Monday.

Maricopa County votes made up nearly 60 percent of total votes cast and counted as of Monday night.

McSally issued a video concession Monday after AP called the race for Sinema. She congratulated Sinema as the first female U.S. Senator from Arizona and thanked her supporters:

Congrats to @kyrstensinema. I wish her success. I’m grateful to all those who supported me in this journey. I’m inspired by Arizonans’ spirit and our state’s best days are ahead of us. pic.twitter.com/tw0uKgi3oO

Much criticism has been lodged against vote counting methods and in particular those of Maricopa County Recorder Adrian Fontes. Fontes was a strong supporter both publicly and financially, of Sen. Bernie Sanders’ run for president in 2016. He has been criticized in the 2018 midterm elections for handling of ballots where voter information didn’t match. Several county Republican parties filed a lawsuit against all Arizona county vote recorders and the Arizona Secretary of State last week over the methods used to verify those questionable ballots. A judge determined Friday that recorders would have until Wednesday, a week following the election, to verify those votes.