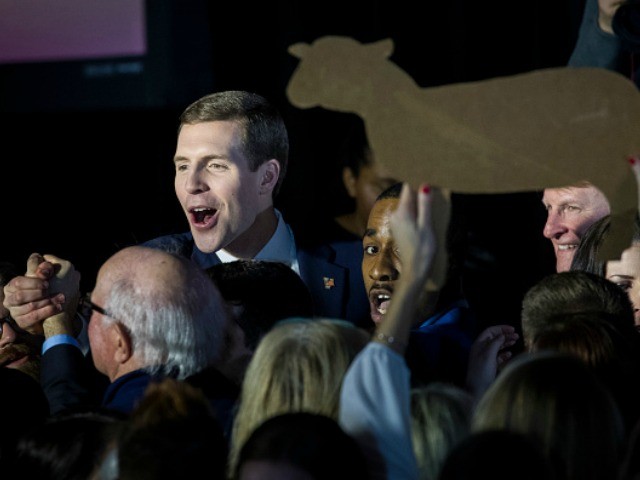 Rep. Conor Lamb (D-PA) has shifted positions on various issues since being elected to represent Pennsylvania’s 18th District in its 2018 special election following the resignation of its former Republican representative Tim Murphy.

Despite claiming to not support House Minority Leader Nancy Pelosi (D-CA) in a February-released campaign ad, Lamb has voted with Pelosi 84 percent of the time on House votes in the 115th Congress, according to Propublica’s vote-comparison tool.

While campaigning in February, Lamb spoke nebulously of the Second Amendment and firearms when invited by news media to comment on a mass murder shooting attack at a Florida high school a week prior:

I believe we have a pretty good law on the books and it says on paper that there are a lot of people who should never get guns in their hands, and we know that the background check system is not achieving that result. What I think it’s going to take is people in Congress who are willing to do more than just talk, who are willing to actually work together and stay late, if it requires that, and do some things that would really produce change.

In a June interview with Pittsburgh Magazine, Lamb derided the National Rifle Association (NRA) as a “gun lobby” subverting American popular opinion through the procurement of Republican politicians.

PITTSBURGH MAGAZINE: As someone who campaigned as a supporter of second-amendment rights, how have the past couple of years — especially the number of school shootings — affected the way that you think about those issues?

LAMB:: I think for me, the real lesson of the past few months on this issue has been that we finally have a chance for average people to stand up and push back against the way the NRA has completely distorted this entire debate. For a long time, virtually no new gun legislation was ever even considered; the NRA had basically bought and paid for politicians, mostly on the right, but on both sides, [and] made it impossible for them to ever do anything new on gun policy. That is finally changing because people are organizing together … While there may be intricacies of gun policy that we disagree on, the overall issue of who should be deciding this — the people and not the gun lobby — is something that we are finally making some headway on.

Although claiming to support Pennsylvania’s coal miners in January, Lamb has not opposed the Paris Agreement, a United Nations-backed treaty marketed as a mitigator of “climate change” whose proponents seek elimination of fossil fuel production in America.

Lamb’s personal website does not include statements of opposition to left-wing pursuits — painted as “environmental” endeavors — to eliminate the financial viability of coal-based energy or other domestically-sourced fossil fuels.

In an April forum, Lamb accepted the premise that Earth is threatened by anthropogenic global warming as a result of fossil fuel burning. He further called for a “hiring spree” at the Environmental Protection Agency (EPA) and a broader expansion of ostensibly environmental agencies and regulations.