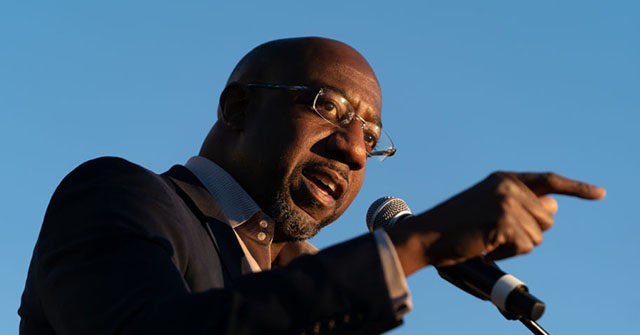 Wednesday, on the heels of giving his first speech on the U.S. Senate floor, Sen. Raphael Warnock (D-GA) appeared on MSNBC’s “The Rachel Maddow Show” to discuss his push for more federal involvement in elections.

Warnock told host Rachael Maddow that he saw the needed legislative action on voting rights as a reason to bypass the Senate’s filibuster rule.

“Well, listen, Rachel, I know that there’s a big debate, obviously, going on about the filibuster,” he said. “And we will have to confront that issue head-on. But my argument today was this: Voting rights bigger than the filibuster issue. And whether we get rid of the filibuster or not, we have to pass voting rights. We have to give the people their own voice in their own democracy. And so, we will see what path that takes. And it’s interesting, you know. Folks asked, you know, people like me, well, should you get rid of the filibuster or not? It seems to me that the onus really is on those in the chamber who have not yet decided to support voting rights because they could vote it up. They could vote for it.”

“And that’s the case that I was trying to make because I think really that what’s at stake is the viability and the health and the credibility of our democracy — that sacred idea of one person, one vote,” Warnock continued. “That’s what’s under assault in Georgia and some 43 other states. And as we stood up as Americans in the 1960s and passed federal legislation to say that we’re one country and that this is the foundation upon which this country is built, we are a democratic republic. We have to do that right now. And there is a path to do it. And to do otherwise would be a terrible dereliction of our duty. If we don’t protect our democracy in the United States Senate for — what is the body of the Senate for?”