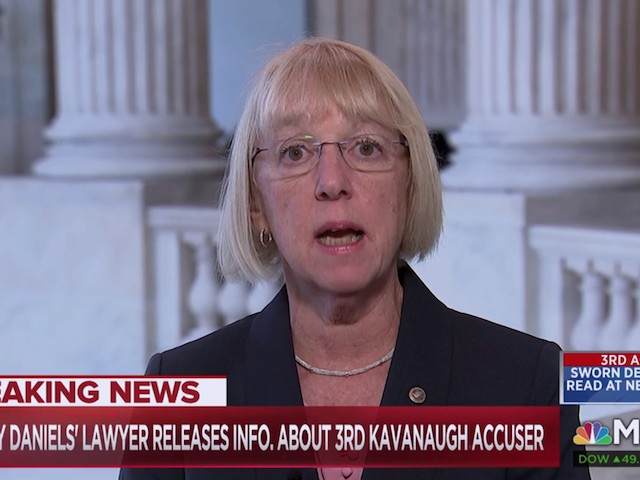 When asked about attorney Michael Avenatti’s client Julie Swetnick’s new allegations, Murray said, “I just read it, and it is horrifying. It is important to note that it is an affidavit and she has signed it under perjury or law. So people don’t do this randomly. It needs to be investigated, absolutely. But let me step back for a minute and are remind everybody that what we do as a Senate today and how we react to the allegations, and what message we send by how we deal with them is critically important. If the Senate were to swish this aside and dismiss Mrs. Ford and do what the president said, and start to call the allegations of she was drunk, we will send a message to young girls once again as we did in 1991 to be quiet, sit down and don’t talk. And what is that message to young boys? Don’t worry. You will get away with it. This is serious, and it needs to be taken absolutely with every, you know, things that we can do to make sure that the voices are brought forward and absolutely investigated. This is something that should not be rushed through. It is deeply disturbing me that these Republicans are doing because we can’t send the message again. We just cannot.”

Addressing the Republicans calling all the allegations a smear, Murray said, “The message that this is a smear campaign frightens me as a woman that once again, we are saying to women out there, don’t come forward, because you will be accused of smear campaigns., no one is going to believe you. Stop and do the investigations, and obviously, witnesses that can be called from both sides and so that we know that evidence and believe it or not, but have an investigation. To have it rushed through right now is such the wrong thing to do.”

She added, “I believe that there are responsible Republicans who are going to share the view that it is not just a Supreme Court nominee that is on trial right now. It is the United States Senate in the year of the #MeToo movement. We have the obligation to show this country we a take the allegations seriously, and investigate them absolutely, but that they will be listened to and heard. We are on trial here as well. I plead with the Senate Republicans to take to a breath. Having somebody on the court on October 1st is less important than getting this right.”