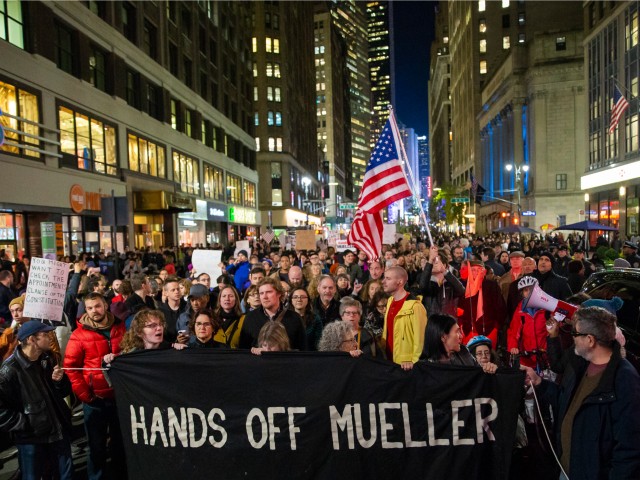 During Friday’s Democratic Weekly Address, Senator Chris Murphy (D-CT) stated that “a functioning democracy requires” Democrats and Republicans unite “to protect Special Counsel Mueller’s investigation.” He added that failure to do so means that “our nation starts to devolve into a banana republic.”

Well, President Trump couldn’t even wait 24 hours. Wednesday, with the Democrats’ election triumph not a day old, Trump fired Attorney General Jeff Sessions, setting off a potential constitutional crisis. He named DoJ Chief of Staff Matt Whitaker as acting attorney general, who has a long history of hostile statements toward Special Counsel Mueller’s investigation — including advocating defunding and imposing limitations on the Mueller probe. Now, more than ever, a functioning democracy requires Democrats and Republicans to come together to take action — next week — to protect Special Counsel Mueller’s investigation. If we don’t, and Donald Trump is given license to shut down an investigation into his own potential wrongdoing, then our nation starts to devolve into a banana republic.

This is a serious issue, but we won’t let it completely distract from what did happen on Tuesday. On Election Day, voters across the country braved the cold, the rain, and hours-long lines for the chance to fulfill their civic duty. I visited my first polling place of the day in New Haven at 6AM and went town to town all day. I saw a passion and excitement for voting that I haven’t seen in a long time.

It was a good night for progress — and for the checks and balances the founders wrote into the Constitution. Democrats won back the House of Representatives, made historic gains in governor’s races, and state legislatures across the country. And held our own in the Senate, battling the toughest map we’d ever seen. We’ve heard for eight years that undemocratic gerrymandering meant it would be impossible for Democrats to retake the House majority before redistricting — that was once conventional wisdom, but the voters weren’t listening.

There’s a whole industry of cable news pundits and political spin doctors who will all have their own explanations for what happened. I’m here to tell you to tune out all the noise, take a step back from refreshing Twitter, and focus on what actually matters.

On the ground, out here in America, this election was about, more than anything else, health care.

Washington Republicans spent all of 2017 trying to rip up protections for patients that were put in place under the Affordable Care Act. But even though they had control of the White House, Senate, and House for 24 months, they couldn’t do it. Why? Because to people out here in America, the politics don’t matter. The Affordable Care Act helped them, and the people rose up and stopped repeal. I’d never seen anything like it.

But that didn’t mean the Republican attacks on our health care stopped — far from it. Donald Trump has systematically sabotaged the underpinnings of the American health care system, jacking up costs and gutting benefits for people when they get sick. Republicans are still coming after your health care through executive orders, perverse new rules coming out of the Department of Health & Human Services, and piles of lawsuits in hopes the Court will do what Congress couldn’t.

And all that set the stage for last Tuesday. People are pissed that Republicans care so much about taking away their health care. Let’s face it, there are some things so fundamental to daily life that they transcend politics and partisanship. Health care is one of those things. It doesn’t matter whether you’re a conservative or liberal, doesn’t matter whether you voted for Trump or Clinton. You want health insurance that covers what you need it to cover, will be there for you in an emergency, and doesn’t cost more than you can afford. It’s simple.

How policies affect real people’s lives may be secondary to the political horse race that the pundits obsess over, but this Tuesday showed that voters care. They saw gleeful Republicans partying in the Rose Garden after advancing a bill that would gut protections for people with pre-existing conditions and jack up premiums for working families. Democrats won all across the country on Tuesday because voters saw the president and Republicans coming after their health care and they said ‘hell no.’

Thanks to victories across the country, Democrats in Congress will be in a better position to stand up for your kids, your parents, your neighbors, your friends. Congressional Republicans have a choice to make: continue down their path of sabotage or work with us to lower health care costs and expand access to quality care. If they continue to sabotage your health care, we’ll stand up against Republican efforts to hand control of your health care over to the insurers that see a sick person as a liability, not a patient who can get better with the right care. We’ll do everything we can to make sure pre-existing condition protections are here to stay we will try to use our new power to take the next steps, like taking on the drug monopolies and forcing down the exorbitant costs of the prescriptions that still threaten to bankrupt many Americans and the U.S. treasury.

But the success of our health care system isn’t just up to us. You have a role to play. Right now.

Open enrollment for health insurance is here! If you are uninsured or you don’t get your insurance through your employer, go to Healthcare.gov — today — to shop around and pick the health insurance plan that fits the needs and budget of you and your family. Do your research — just be sure to pick a plan by deadline of December 15th.

Everything that I, my colleagues in the Senate, and the new Democratic House majority do to defend patient protections will be meaningless if you don’t go out and make sure you have health insurance. Do it. It’s easy, and it’s the single best thing you can do to protect you and your loved ones for 2019.

Oh, and one last thing. We get to take to the streets to protect the Mueller investigation, and have these arguments about the future of American health care, because we live in a democracy, where everyone gets a say. And so remember that this Sunday, Veterans Day. Tuesday’s vote represented a dramatic shift in power, in Washington and all across the country. But remember that millions of people across the world never get to vote in an election. Thank a veteran this weekend, because they made sure that we can.”