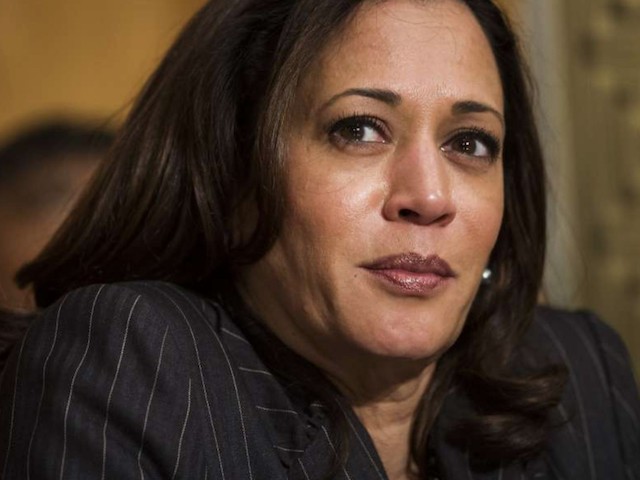 Harris said, “I strongly believe that based on every type of work he has done that his —the issue with him is not only that he’s a political ideologue. It’s not about only his beliefs, it’s about the fact that he’s been an operative, a political operative. And so you look at that on a number of issues. For example, I brought up dog whistling. And you know dog whistling is a term for basically people who are speaking in code to touch certain people who recognize the language as being representative of how they think.”

She continued, “For example, he used the term in a Wall Street Journal opinion piece that he wrote — now this is a lawyer who is a judge who talks about how he uses his words very carefully— twice in a published opinion he used the word racial spoil system. One of the witnesses during the hearing was the Chairman of the Congressional Black Caucus Cedric Richmond. I asked him when he was a witness, ‘what does that term mean?’ And he said that’s a dog whistle. That speaks to people who believe because this was the question I asked Kavanaugh when he was before us. That speaks to the belief that somebody is taking something from them that nobody else should have. So that’s the term that has been used when people talk about affirmative action or when people talk about how we have looked at the disadvantage and the historical disadvantage the government has created for minorities and particularly black people. and he uses the word racial spoils systems.”

She added, “He used the word abortion on demand. There are specific cases that —one in particular, the Garza case, where there was a young woman, immigrant woman, 17 years old who went through every step that the law required her to go through to obtain an abortion. And yet he called it abortion on demand because those who would deprive women of their ability to make decisions about their own body are trying to suggest it’s just like tv on demand. You just click a button and you get it, which is mislead, and it is wrong. So those are the concerns I have.”