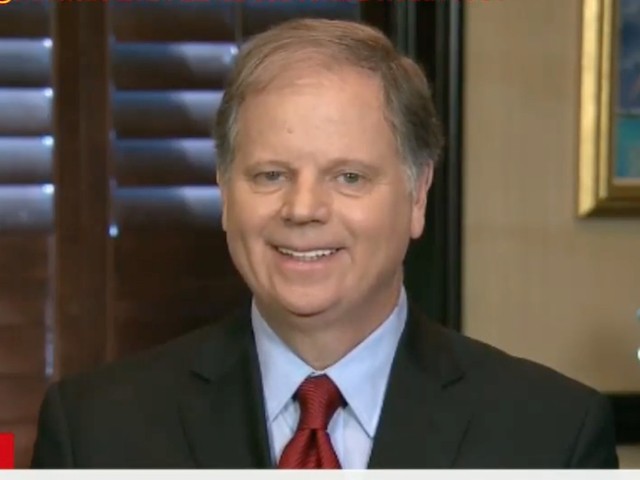 On Thursday’s broadcast of CNN’s “The Lead,” Senator Doug Jones (D-AL) argued President Trump should dial his rhetoric back, but lack of civility “is not a problem just simply on the right with the president of the United States. It’s a problem on all sides. And we saw that last year with the shootings of the Congressional leaders.”

Jones said, “I talked about injecting civility and respect for people and having disagreements that we can agree to disagree on. We’ve got to dial it back. It is not a problem just simply on the right with the president of the United States. It’s a problem on all sides. And we saw that last year with the shootings of the Congressional leaders. We saw it in the ricin incident recently.”

Jones added the president “did the right thing, obviously, yesterday, when he first condemned the violence. I think Vice President Pence did the right thing when he condemned the violence. I don’t think it’s appropriate to blame the media. This is not an issue, Jake, of just ugly, negative campaigning, negative media. We’ve had that for centuries in American politics. This is about where you really condone violence, when you talk at rallies about roughing up reporters or commending Congressional — members of Congress who have body-slammed members of the media. It’s about — talking about enemies. You know, when you use the word ‘enemy,’ it raises a threat level, unlike just calling somebody a silly name. That’s the kind of rhetoric I think the president needs to be very careful on and just go ahead and dial it back. Don’t point the blame at somebody else. And I — make no mistake, I’m not simply pointing the blame at the president. This is a societal problem that we have got to start working at, at a grassroots level.”