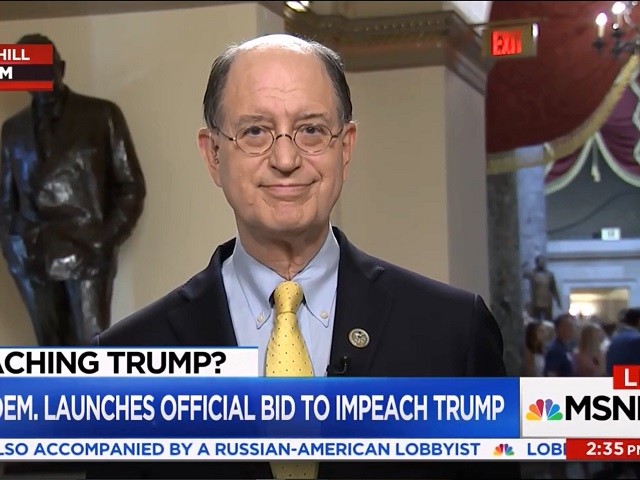 MSNBC’s Ari Melber introduced Sherman when he came on as “a congressman who’s calling for impeachment,” but the California representative voiced his displeasure with that description and lamented that the only way he can get on television is to talk about impeachment.

“Ari, I’m not sure you’re describing my position accurately, but we’ll get to it,” Sherman began.

“Look, the president obstructed justice. That was apparent to me in July of 2017 when I introduced articles of impeachment, but I knew those articles couldn’t lead anywhere without bipartisan support because, of course, Republicans were in control. Prosecutors don’t indict unless they think they can get a conviction. We need to change public opinion so that we’ll get a fair hearing in the United States Senate because impeachment without removal is,” he explained.

“What was inaccurate about the mentioning that you were for impeachment?” Melber asked.

Sherman replied, “I’ve been pushing towards impeachment, but I want impeachment on a bipartisan basis.”

“Actually, I’ve been trying to get on your show to talk about the Saudi nuclear program, and if it was my time we’d be talking about efforts to control drug prices,” Sherman replied. “There’s this image in this country that Congress is focused on impeachment. That’s the only thing I can get on TV to talk about, but it’s not really what I’m working on.”
“Interesting,” Melber responded before shifting back to asking about impeachment.