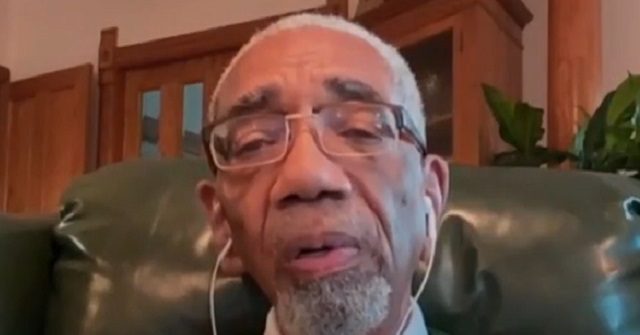 Thursday on MSNBC’s “All In,” Rep. Bobby Rush (D-IL) discussed footage captured on security cameras of Chicago police officers resting in his Chicago office as protests were underway outside.

While discussing that incident, Rush commented that police standing in some communities was at an all-time low, including when Fred Hampton, who co-founded the Illinois chapter of the Black Panther Party with Rush, was killed by law enforcement in 1969.

“I think that this is really a very low moment,” Rush said. “It’s particularly given the time when we are really hurting. The police-community relationships across this nation are at an all-time low. I’ve never seen it this low, even during the ’60s. Even when Fred was murdered, and they almost murdered me, it’s never been this very low on a national level. And so, I understand that these officers — again, we have to root these kinds of officers out.”

As for his office, Rush praised Chicago Mayor Lori Lightfoot for how she handled the situation.

“And I want to take my hat off, Chris, to our mayor,” he said. Mayor Lightfoot is an amazing leader, especially for these times, and she did not hesitate, not for one moment. Once I contacted her office and told her I had these videotapes, she asked me to immediately come down to bring these tapes so she could see them. And when she saw them, you can tell she was angry, she was upset, she was torn. She apologized deeply, and she — and she resolved, said she was going to make sure that she found out who these officers were and that they would receive a consequence for their relaxing, for their repose, for their relaxing.”

“When their coworkers, their colleagues, other police officers was out on the streets getting pelted with rocks and bottles and putting their lives on the line, we had these police officers found a cubby hole and they went relaxing in that cubby hole, leaving their friends, their colleagues, their coworkers out to fend for themselves,” Rush added. “What cowards. What cowards. These are absolutely a bunch of cowards in their uniform.”