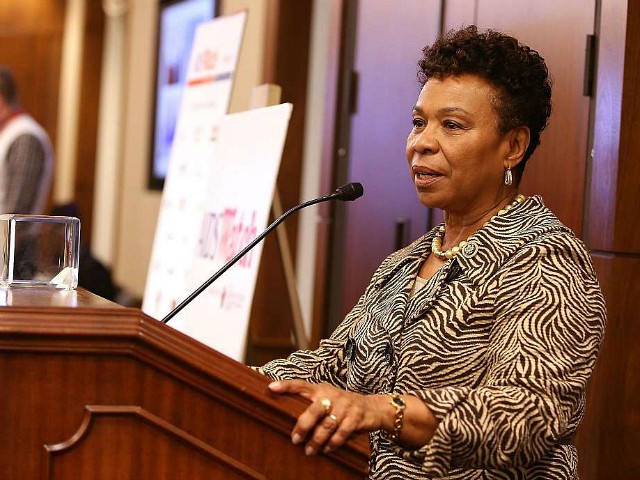 During Friday’s Democratic Weekly Address, Representative Barbara Lee (D-CA) stated that President Trump has “presided over the most corrupt administration in history.”

But this year is particularly meaningful, as we mark the 400th year since the first African slaves arrived on the shores of America.

Families were separated, children were taken from their parents, and they entered into lives of bondage and unspeakable cruelty.

From this painful history, African Americans have risen – to lead our nation, transform music and art, pioneer new inventions, and speak as the conscience of this country.

I stand on the shoulders of Black leaders who spoke truth to power.

Visionaries like James Baldwin, a clear-eyed social critic who told the stories of disenfranchised African Americans.

James Baldwin used to say: ‘I can’t believe what you say, because I see what you do.’

Leaving the House Chambers on Tuesday after the State of the Union, these words echoed in my head.

We cannot believe what President Trump says, because we see what he has done.

He has sabotaged our health care system. Lined the pockets of billionaires at the expense of the poor. And presided over the most corrupt administration in history.

And after offering a lukewarm pledge of unity in his speech, he then turned around and threatened anyone who would hold him accountable.

Democrats will follow the Constitution. As one of three co-equal branches of government, Congress will be the check that this President so sorely needs.

We will work For The People. In fact, we’ve already begun.

One of our top priorities is H.R. 1 – The For the People Act.

This legislation would safeguard our democracy, expand voting rights protections, and rein in the corrosive influence of money in politics.

We’re also tackling rising health care costs, because no one should have to choose between refilling their prescriptions or putting food on the table.

And we’re working to raise wages for everyday families who are still struggling to get ahead, while billionaires hoard wealth at the very top. We will start by rebuilding America’s crumbling infrastructure and creating good-quality, good-paying jobs.

Our agenda was written For the People, for all the people.

It is an agenda built on radical truth, on the understanding that every American will benefit from fairer elections, lower health care costs, and higher wages.

And this February, as we celebrate the Black truth-tellers and change-makers who have transformed this country, I am reminded that this work must continue.

There are more chapters to be told, more battles to be won.

When African American women die in childbirth at nearly four times the rate of white mothers – there is more work to be done.

When every day, across the nation, our neighbors, classmates, our loved ones are gunned down in senseless acts of violence – there is more work to be done.

When children are once again snatched from their mothers’ arms as they come to our country – there is more work to be done.

Yes – there is more work to be done.

Four centuries after the first slave ships came to the shores of Virginia, I sit in Congressional leadership as a black woman tasked with building a more perfect union, with liberty and justice for all.

Thank you for honoring me with this solemn responsibility. I welcome it!