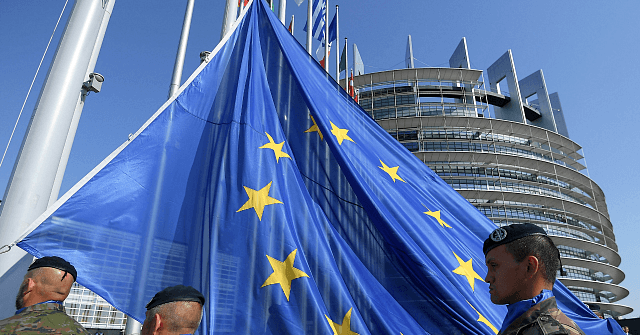 The Brexit Party’s MEPs have been compared to Nazis because they turned their backs on the European Union’s ‘national anthem’ at the opening of the European Parliament in Strasbourg.

I’n just surprised that the Brexit party so shamelessly copied the Nazi party in turning its back in an elected assembly. At least we now know what we are up against. https://t.co/aRBTCePTNq

This is just the kind of accusation you would expect from an ex-BBC journalist turned university chancellor: fatuous, woke — and utterly wrong-headed.

First, the European Union is a corrupt, anti-democratic, and increasingly authoritarian institution whose policies on everything from open borders (pro) to free speech (against) have inflicted enormous misery on people across the European continent. So, publicly to display your disdain for such an abhorrent polity, as those Brexit MEPs did, is hardly what you’d call Nazi behaviour. If anything, it’s the exact opposite.

Second, let’s not forget that the Nazis were actually very fond of the European Union’s ‘national anthem’, “Ode to Joy” from Beethoven’s 9th Symphony.

Here are some actual Nazis — not the pretend ones of Esler’s Brexit-deranged imagination — filmed during a 1942 performance of Beethoven’s 9th staged for Hitler’s birthday.

Third, there’s that awkward question of why the European Union which is not a nation yet has managed to acquire for itself a ‘national anthem’ for which it appears to require MEPs to stand respectfully.

1. How come the European Union has an anthem?

Here’s a typical little EU story for you.

Do you remember the Treaty Establishing a Constitution for Europe 2004?

Short version: the European Union sneaked it into its constitution under the radar — with its usual method of lying and obfuscating at every turn.

It’s written into something called Declaration 52 to which, you’ll notice, the United Kingdom is not a signatory.

7. Instead, a sneaky little declaration (Declaration 52) was buried away in the small print and attached to the treaties.

You can read the declaration below. pic.twitter.com/43mmsaEd3U

The reason the United Kingdom didn’t sign is because the then-Labour government knew how unpopular with EU was with the electorate. To be seen signing up to a national anthem would have confirmed what Eurosceptics often claimed — that the EU was shaping up to become a superstate with its own taxes, foreign policy, army etc. By not signing, Tony Blair and Gordon Brown were able to reply to anyone who raised this point that it was nonsense: the UK would never have supported such a thing.

Lots of Remainers got jolly upset by the Brexit MEPs’ turning their backs on this national anthem.

For this Sunday Times and Guardian journalist, it was quite literally the most shaming slur on her country she had ever witnessed.

This has made me cry. I have never, ever been more ashamed to be British. Hard to think of a greater affront to those who died for our country. @BorisJohnson, are you proud of what you have achieved? This would not have happened without you https://t.co/SK3q9B1Z9r

But now we have examined the evidence we have seen that the opposite is true. When those MEPs from The Brexit Party turned their backs on the EU’s national anthem they weren’t being disrespectful. Rather, they were scrupulously observing the niceties of the European Union’s constitution by acknowledging that, at least as far as the United Kingdom is concerned, the EU has no national anthem.

Perhaps, rather than censuring them, the European Union should award each of those Brexit Party MEPs a Ritterkreuz with oak leaves — or whatever it is that the EU uses these days to acknowledge signal service by its most fanatical devotees…