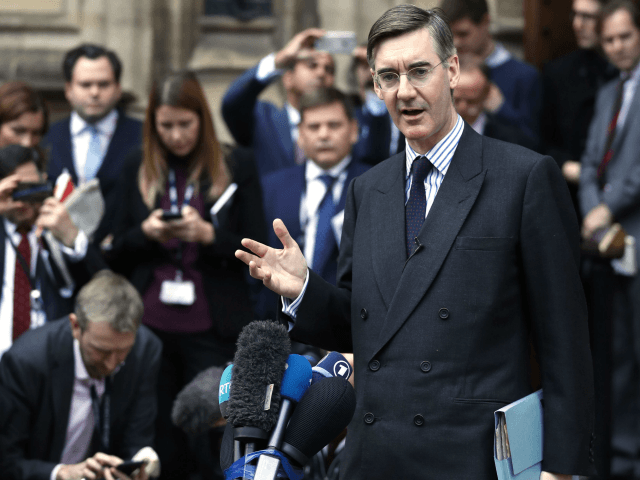 There’s nothing a star columnist hates to tell his readers more than “I told you so.”

But I’m afraid, through gritted teeth I’m going to be forced to say it. I was right, wasn’t I? I was bloody well right!

I told you to keep your nerve and that a No Deal Brexit was where we were headed. But many of you didn’t believe me because you were too busy running round like headless chickens and throwing your toys out of your prams and yelling at me for being taken in by the beguiling words of Tory toffs.

Well here’s my answer to the last accusation:

That’ll be Jacob Rees-Mogg, the man so many of you doubted, elegantly thrusting his stiletto between the Prime Minister’s ribs just moments after having declared her to be “unquestionably honourable.”

(Students of Shakespeare may recall that Mark Antony performs a similar trick in Julius Caesar, praising Brutus as an “honourable man” in the Forum the better to inflame the wrath of the mob against him.)

Cometh the hour, cometh the man. Rees-Mogg is a man of his word and has done what he said on my podcast he was going to do: bide his time, not get distracted by the little things, and strike when it matters. That’s how Old Etonians roll. They’re endlessly, beguilingly charming until suddenly they are not.

But this isn’t just an exciting moment for the Mogg: It’s H-Hour for Brexiteers generally.

For months, years actually – ever since June 24 2016 – we’ve been enduring a Phoney War in which the Remain camp (led by the Prime Minister herself) and the Brexit camp have been squaring up to one another, manoeuvring behind their lines, each waiting for the other side to make their move. For us helpless onlookers it has been hugely frustrating. “Why won’t those useless tossers do something?” we’ve all been screaming from the wings.

If it has been bad for us civilians, though, imagine how much harder it has been for those on the front line. I’m thinking particularly of all the pro-Brexit MPs who staked their political careers on a matter of principle, supporting a cause – Brexit – that all the experts and the bookies said was doomed to defeat. Then, against all odds, they won the referendum. And what was their reward? Why, largely to be marginalised by Theresa May and her Remain-dominated Cabinet, as members of the awkward squad who’d better be on their very best behaviour and do as they were told or they’d be out of government like a shot.

Do you honestly think that these Brexit MPs – who, remember, made far greater a personal commitment to the Brexit cause than most of us normies did – haven’t been yearning as desperately as any of us have for May to do the right thing and deliver full Brexit? Do you really imagine they haven’t been every bit as maddened by her intransigence as the rest of us?

Their problem hasn’t been lack of will. It has been timing: when to strike for maximum impact and in such a way as to be sure that they’re not going to do more harm than good by ending up accidentally securing Theresa May’s power base and letting her get away with blue murder.

I don’t pretend to understand the complexities of votes of no confidence, of the mechanisms within the Tory party for defenestrating a Prime Minister, or indeed, all those questions about the “parliamentary arithmetic” needed to flush May’s glitter-rolled turd of a Brexit plan down the toilet of history.

Nor, I suspect, do most of you.

But I’ll tell you who do. Jacob Rees-Mogg and his fellow Brexiteer MPs. They’ve been thinking about these details long and hard because their careers depend on it and because they don’t want to go down in history as the idiots who flunked the opportunity of extricating their country from the most disastrous relationship since Henry VIII met Anne Boleyn.

Again, I’d stress, it’s perfectly possible that they’ve judged this wrong and that Theresa May is going to stay in power and that Britain is going to remain an emasculated satrapy of the overweening European superstate.

Judging by the fast-moving events of today, though, I’d say that Theresa May is toast as Prime Minister and that we’re very much on course for the best kind of Brexit we can probably hope for at this stage: a No Deal Brexit, on World Trade Organisation trading terms, with no obligation whatsoever (though we will) to pay anything close to the £39 billion Theresa May’s crap negotiators have even offering in order to buy us out.

This is a big day for Britain – the most exciting and significant since the EU referendum.

It reminds me of old wartime footage of fighter pilots waiting uneasily at their aerodromes on the South East coast of England, some lounging in deck chairs trying to concentrate on a book, some smoking pipes or playing ball games, but all preoccupied with something else entirely…

…then the bell rings. “Scramble! Scramble!” And they hurry to their waiting Spitfires and Hurricanes.

Chocks away. Tally ho, chaps! The battle to save Britain from yet another continental menace has begun.