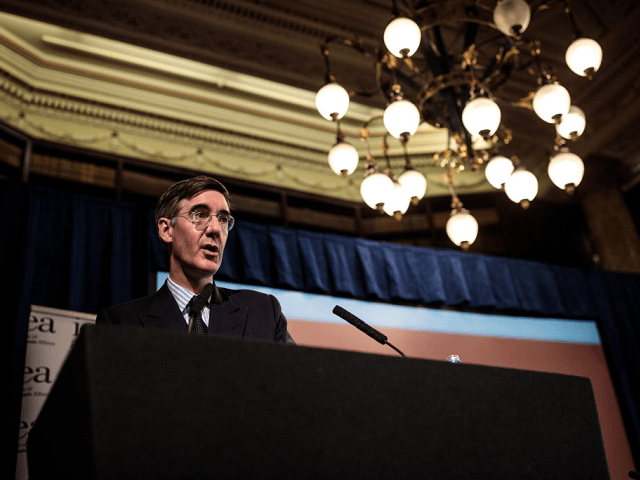 If that formula is true – and I believe it is – then Britain has just dodged one almighty bullet, the biggest since 1940.

To get an idea of how big a bullet, you need only glance down at the tragic, offshore-wind-blighted eco-pod of Brighton, where Jeremy Corbyn and his hard-left Labour crew are currently preparing for government at their annual party conference.

They’re so shamelessly anti-Semitic that the few remaining Labour MPs who are Jewish now have to be escorted under police guard.

They want to renationalise the railways (at a cost of £176 billion they simply won’t have when sterling inevitably collapses and the credit lines dry up), they want to massively hike taxes on “the rich” (ie the productive sector of the economy), they want workers to be given 10 percent of every company and seats on the board.

They want, as one leading Labour aide has been honest enough to admit, a “Soviet Britain”.

And they mean it too. What horrifies about Labour is not merely the economic and historical illiteracy of its worldview but the gloating arrogance and jaunty callousness with which its acolytes plan to bring about their new (Jew-free, Hamas-compliant) Jerusalem. They really do believe you can’t make an omelette without breaking a few heads.

If the vengeful malcontents of Corbyn’s Labour ever get voted into power it will be the end of Britain for the foreseeable future.

And until this morning, it seemed distinctly possible that the unthinkable might well come to pass.

The release of the Institute of Economic Affairs‘ (IEA) alternative Brexit plan – and its welcome by leading parliamentary Brexiteers, is what.

You can tell it’s a game changer because all the usual Remainer suspects are pouring scorn on it.

I’ve written a piece about the maths used by the IEA. In short, I think it’s pretty dubious. https://t.co/SmSz1LYdfx

And all the people who matter are right behind it:

Fine piece of work by @ShankerASingham @iealondon – This is a plan the EU would understand and respect – delivering prosperity for the U.K. and our European partners. I’ve no doubt it would unite MPs and the country #PlanAPlus #ChuckChequers https://t.co/Ya9AReeCQi

Can a report by a free market think tank ever be that influential? Well in this case, I’d say, yes.

To understand why you first need to understand the current biggest problem in UK politics: the majority of people in Britain voted for Brexit but none of the three biggest political parties represents them. (Yes, of course, UKIP does but they’re not currently capable of winning a general election. And the thought of the disasters that would have to befall the country before such a thing came to pass is so horrible that we should all better hope that it never does…)

The Conservatives are the party most likely to adopt this mantle. But they’re currently hamstrung by the fact that they’re led by a Remainer prime minister, who appointed lots of other Remainers into her cabinet, in a parliamentary party still infested with other Remainers – a legacy from the Cameron era when any Tory of sound principles was denied a place on the parliamentary shortlist.

This Remainer ghastliness reached its absolute nadir at the infamous Chequers meeting earlier this year where Theresa May summoned her cabinet to her country residence and told them they’d all lose their positions and be walking home unless they signed up to her negotiating plan with Brussels.

But the plan was a stitch-up, concocted by her rampantly Europhile civil servant advisor Olly Robbins whose approach to negotiating with the European Union’s Michel Barnier more or less involves vigorously waving a white flag, then assuming the position and asking M. Barnier whether his preferred lubricant is organic cold-pressed olive oil or goose fat.

And they were right, of course.

The fundamental problem with Mrs May’s Chequers proposal was that it failed to do the very thing that 17.4 million people voted for in June 2016: deliver Brexit.

On the contrary, it would have kept Britain in what Boris Johnson has called a “vassal state” as a “colony” of the European Union.

Remainers often try to claim that the 17.4 million people who voted Brexit didn’t know what they were voting for.

But one thing’s for certain: what they weren’t voting for was “more of the same EU regulation and meddling and constrictions, only without any of the ‘influence’ or respect.”

It is ludicrous – almost beyond belief, indeed – that anyone in May’s feeble administration imagined that this sell-out fudge would endear either the government or the Conservative party to the electorate. But that’s a measure of how blinkered and useless these Conservatives are.

And the rot goes back a long way.

Quite the best piece I’ve read on this subject was one Allister Heath wrote in the Telegraph the other day. It’s so good I’m going to have to quote from it extensively.

Conservatism is in crisis in Britain, and it will take more than half‑baked leadership plots to save it from calamity. The rot runs deep and wide; the Government’s pathetic inability to negotiate a proper withdrawal from the EU is merely its most immediate manifestation.

The appalling reality is that Jeremy Corbyn is on the brink of power and the Tories have only themselves to blame. They have failed, and disappointed, and failed again. Their party itself is a dysfunctional shell. Few understand what it stands for. Many of its own voters don’t trust its motivations; even the Brexit vote, which ought to have been its greatest opportunity for 30 years, happened despite, rather than because of, the Tory machine and establishment.

In the absence of any distinctive philosophy – the days are long gone when its ideology was a fusion of Whiggism and Toryism, a creed capable of inspiring and enthusing – the party is a coalition of convenience, committed to power for the sake of it.

Yes. Then Heath goes onto look at May’s Conservatives in particular. He finds them deeply wanting.

Mayite Tories thus market themselves as slightly better managerialists, mercenaries capable of implementing the fashionable nostrums of the moment – and also, because they have to, some version of Brexit, presumably adulterated beyond recognition. We, too, will cap prices to stop those nasty “profiteers”, the Government promises us, but it will be more sustainable than if Mr Corbyn does it; we, too, will put up taxes, but only because we care about the public finances; we, too, will ban and restrict and chide and scold, because that is what TV celebrities like Jamie Oliver are telling us to do.

Is it any wonder that nobody, but nobody, can muster any enthusiasm for such a sorry show? Fear of a Labour Party that wants to seize private property and cosy up to Iranian mullahs and anti-Semites, yes, there’s plenty of that, which explains why the parties are level‑pegging – but love or excitement for the Tory “vision”? Nada.

You can’t sell yourself to an increasingly divided nation as a consensual delivery agency when everybody can see that you cannot actually deliver the goods, from housing to trains that work; and you cannot be ideologically passive when confronted with the fiercest, most fanatical Marxist army in British political history.

Indeed. But such is the current climate – I’m amazed Heath was permitted to be so forthright in the cuckified, milquetoast Telegraph – that those of us who believe in conservative principles are marginalised as ‘swivel-eyed’ or ‘far right’ or – at best, impractical and incapable of recognising that ‘elections are won in the centre ground.’

Well I guarantee you one thing. If the Conservatives go into their next general election campaigning on the kind of centre ground sell-out positions like the ones outlined by Heath above, then it’s “Hello Prime Minister Jeremy Corbyn.” (And “Hello, gulag” for the likes of me).

This is what is so important and refreshing about this IEA paper. What matters is not so much what it says – you can read it here – as for the principles which underpin it and for the opportunities it offers the Conservative party to revitalise itself on lines which accord with the way the majority of people in Britain think.

What people in Britain want is prosperity; they want a better life for their children than they had themselves; they want a country they can feel proud of that is accorded its proper place in world affairs; they don’t want to be bossed about by foreigners. (All right, so I haven’t actually conducted a poll. But if you’re deluded enough to imagine people don’t want these things, then I’m guessing you’re reading this at a conference hall somewhere in Brighton.)

Theresa May’s Chequers plan would have denied the British people all these things. It would, for example, have left Britain unable to negotiate bilateral trade deals with other countries or, indeed, to reduce much of the red tape that stops businesses from doing the business that creates jobs and makes people prosperous and free.

Yet up till today, Chequers was all there was. And it would have ended in darkness.

Now there is an alternative. It has growing support among the people who count. Suddenly, Britain’s future looks a whole lot brighter.