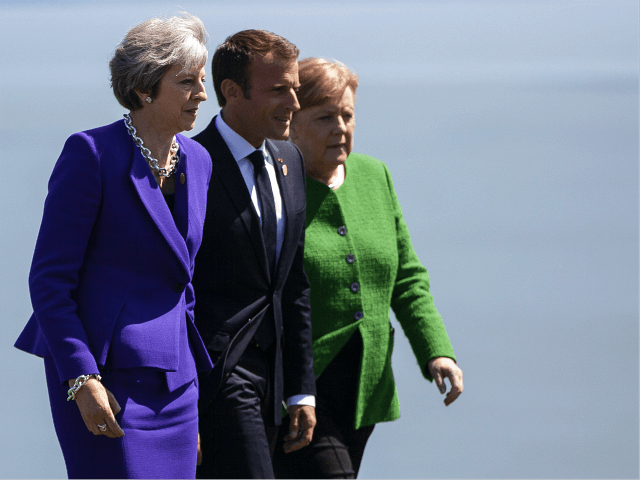 “Marrakech C’est Non!” says one of the banners wielded by the Gilets Jaunes at the protests in Paris this weekend: “No to Marrakesh!”

This refers, of course, to the United Nations conference in Marrakesh, Morocco later this week; the one where the world’s nations are being asked to sign away their sovereignty, their freedoms and their identity in one of the most pernicious agreements ever devised by the UN: the justly infamous UN Global Compact for Migration.

Lots of countries have already announced that they are not going to sign, among them the U.S., Hungary, Poland, Austria, Italy, Israel, Bulgaria, and Australia.

There’s a clue as to how toxic this compact is: when even a country as emasculated and politically correct as Australia finds it too much to swallow.

But perhaps a bigger clue as to its toe-curling, achingly right-on, surrender-monkey awfulness is offered by the countries which are planning on signing up to it. These include Leo Varadkar’s Ireland and Justin “President Bieber” Trudeau’s Canada: arguably the two Western nations you’d least want to be living in right now because they are currently in the hands of politically correct bedwetters bent on destroying every last vestige of their national identity and replacing it with some kind of squishy, globalist melting pot where people of all colours and creeds hold hands under a rainbow.

Another country which is planning on signing it is the United Kingdom. Which is bizarre to the point of incomprehensibility when you discover what this UN Global Compact on Migration entails.

Essentially it’s a globalist masterplan for making migration easier. Much, much easier.

Not the kind of migration that you or I might approve of: say, eager computing graduates from the universities of Cluj Napoca coming to bolster our tech economy with their Python programming skills; me spending a few years in Singapore/Costa Rica/Switzerland/the U.S. or wherever in order to ride out the coming Corbyn terror; kids like my eldest boy moving to the low tax, entrepreneur-friendly environs of Hong Kong to make their fortune; win-win situations which work to the advantage both of the migrant and the host nation…

I mean the kind of migration most of us dread: the one where hordes of mostly unskilled, sometimes criminally deviant males of fighting age descend on our civilised home nations from their considerably less civilised countries — at best to overburden our infrastructure and exploit our overgenerous welfare systems, at worst to destroy us from within.

It’s happening right now across the West: the stone-throwing, wall-scaling, MS-13 tattooed migrant caravans swarming towards the United States’ southern border; the gangs of sullen youths who’ve turned St Denis — the cathedral where most of France’s kings are buried — into a cross between Lagos and Mogadishu; the Muslim ghetto kids who’ve helped Malmo in Sweden become the rape and grenade-attack capital of Europe; the hassly Africans who dog your every step through the tourist sites and beaches of Italy, importuning you to buy stuff you don’t want; the millions of migrants Angela Merkel invited into Germany, now adding impressively to the country’s rape and murder statistics…

You’ll never guess what the United Nations’ solution to this problem is. Actually, knowing the UN as we all do, you probably will.

Yep: the UN’s solution is to make it illegal to talk about this problem.

Here is the relevant section of the UN Global Compact on Migration:

OBJECTIVE 17: Eliminate all forms of discrimination and promote evidence-based public
discourse to shape perceptions of migration

33. We commit to eliminate all forms of discrimination, condemn and counter expressions, acts and
manifestations of racism, racial discrimination, violence, xenophobia and related intolerance
against all migrants in conformity with international human rights law. We further commit to
promote an open and evidence-based public discourse on migration and migrants in partnership
with all parts of society, that generates a more realistic, humane and constructive perception in
this regard. We also commit to protect freedom of expression in accordance with international
law, recognizing that an open and free debate contributes to a comprehensive understanding
of all aspects of migration.

To realize this commitment, we will draw from the following actions:

a) Enact, implement or maintain legislation that penalizes hate crimes and aggravated hate
crimes targeting migrants, and train law enforcement and other public officials to identify,
prevent and respond to such crimes and other acts of violence that target migrants, as well
as to provide medical, legal and psychosocial assistance for victims.

The excuse being bandied about by defenders of this outrageous document is that it is not legally binding. No, indeed. But that’s the excuse that believers in one-world government always use to mask their sinister scheming. It was the same with the UN’s Agenda 21 all those years ago at the 1992 Rio Earth Summit. People signed up to it because it supposedly wasn’t binding. But it very quickly became an excuse for all manner of green lobbyists and politicians and left-leaning pressure groups and local governments to force through policies as if it were binding.

If you want to read more about the threat of the UN Migration Compact, this piece by London Assembly member David Kurten is a good place to start.

Molyneux comes up with some pretty shocking statistics on the damage done by mass migration — and the unpopularity thereof in the countries that have to put up with it.

50 percent of Kenyans say they would move to another country (and they don’t mean Somalia or Zimbabwe, by the way) if they could.

12 Germans have to work in order to pay the costs of every one of the two or three million migrants Angela Merkel invited into the country.

In 2017 the Swedish government spent $18.6 billion paying for refugees – 19 percent of its annual budget.

Why would any country on earth sign up to a deal so very obviously against the interests of its nationals?

It’s very simple: the globalist political elite doesn’t respect nation-states, nor does it give a damn about the views of ordinary people. Indeed, it despises them so much that it would much rather make their views illegal than listen to what they have to say.

That’s why the Gilets Jaunes are setting France ablaze; that’s why thousands of protestors are out on the streets of London following Tommy Robinson and the #BrexitBetrayalMarch; that’s why they elected Matteo Salvini in Italy, Viktor Orban in Hungary, Jair Bolsonaro in Brazil; that why Donald Trump is president of the USA.

We are living in an era of world revolution. And the globalists — as embodied by the kind of George-Soros-financed campaign groups pushing that suicidal UN Global Compact for Migration — are on the wrong side of history.