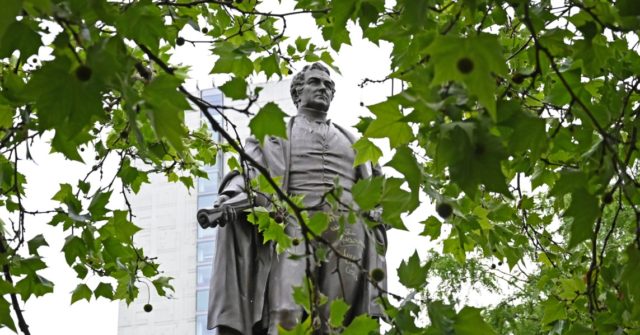 A wealthy, Oxford-educated, American-born museum curator has been advising Black Lives Matter/Antifa protestors on Twitter how to do permanent damage to bronze statues using corrosive chemicals.

Madeline Odent, curator of Royston Museum in Hertfordshire in England’s picturesque, rural east, has been using her art conservation knowledge to advise the mob how best to harm what she calls ‘memorials of genocidal racists’.

‘from an art conservation perspective, it’s honestly fine to throw paint on memorials of genocidal racists! paint is pretty easy to clean off. What would be an absolute SHAME is if people were to throw certain common HOUSEHOLD ITEMS that can cause IRREVERSIBLE BRONZE DISEASE.’

In subsequent tweets, the privately educated curator, married to a millionaire French banker goes into detail about how to create this ‘irreversible bronze disease.’

Yes, it can be removed, but ‘the chemical needed is super carcinogenic, so, it rarely is. Instead, conservators usually ‘pause’ the disease by removing either moisture or oxygen using specialised storage.’

When challenged on her behaviour, Odent was snarky and defiant.

‘no I’m pretty sure I’m telling people how to avoid damaging precious and extremely valuable relics of history, without which we would immediately forget about the entirety of the british empire.’

‘like I could be wrong, what do I know, I’m just a dumb chick with a twitter handle’

To me, the most repulsive spectacle this week has not the mobs of ignorant extremists who’ve decided to impose their will on public monuments in British cities, but a museum curator from @RoystonMuseum tweeting out advice on how best to vandalise monuments.

More dispiritingly still, the spoilt rich missy appears to have the support of her museum’s bosses.

Thanks for your comment. We stand with and for #BlackLivesMatter, and we do not support the legacy of racists.

To anyone familiar with the world of museums and galleries this will come as sadly little surprise. The sector has largely been hijacked by leftist political activists more interested in identity politics, cultural Marxism and post-modernism than they are in the history of art.

The kind of Year Zero, Maoist mentality exhibited by Odent is not the exception but, increasingly, the rule.