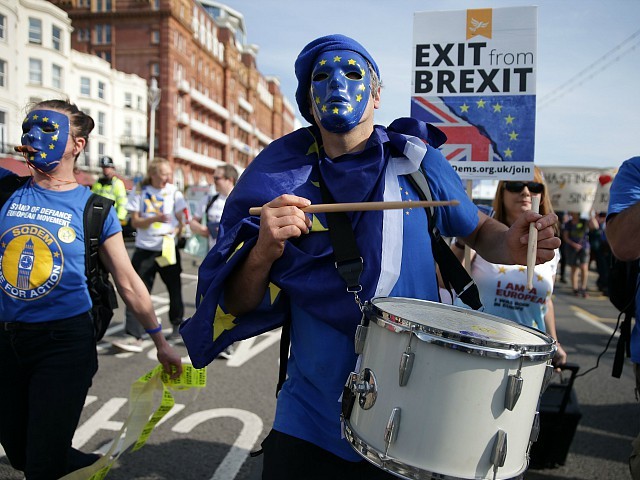 Finally I understand everything: why Brexit is proving so impossible to negotiate; why Leave voters are more determined than ever to get the hardest Brexit possible, preferably No Deal; why Theresa May keeps caving to Brussels; why the political class is so out of touch with the electorate; why this can only get uglier…

Actually, I knew the answer to all this before. And so did you.

It’s really very simple: the European Union is a totalitarian superstate run by sharp-suited, hatchet-faced technocrats who have no interest whatsoever in freedom, fairness, justice, probity, logic, first principles, or economic reality. Their project is — and always has been — an end in itself: a conspiracy against the people by the liberal elite to subsume them, whether they like it or not, into a vast, anti-democratic, politically correct, socialistic, borderless supranational bureaucracy with its own government, military, currency, tax regime, rules system.

Why am I repeating this obvious truth? First because it pays always to know your enemy. Second because our Remainer elite — from Westminster to big business to our largely supine mainstream media — has been putting up so much chaff of late that it’s easy to lose sight of the basic fact.

And third because I’ve just watched the first episode of the BBC’s documentary Inside Europe.

Did you see it?

It was extraordinary. This viewer caught perfectly my reaction – and, I suspect, your reaction too.

If I wasn’t a Brexiteer before watching #InsideEurope I would be after watching it. Without exception, the EU leaders come across as arrogant, bullying, and scornful of Britain.

Produced by the great Norma Percy — whose documentaries have an extraordinary knack for getting access to all the key players, talking frankly — this documentary concerned the run-up to the EU Referendum: why David Cameron (to his great subsequent regret) promised the public the Referendum; how — lol — his friends at the European Union bent over backwards to give Cameron such fabulous concessions that the British public would never in a million years vote to leave this benign and caring institution…

Though I’ve never had much time for David Cameron — at least not since our dope-smoking days at uni — I sat through this documentary feeling almost sorry for him.

Off he went, several times, to Europe with his begging bowl. “Give me something, anything to offer voters so that all us Remainers don’t lose this Referendum,” he pleaded.

And what was the EU’s response?

“Tell you what, Dave. Since we’re feeling very very generous and we greatly respect you and your country — and we promise this has got nothing to do with the £350 million you pay us every week for sod all in return — here is what we’ll do. You know that bowl of soup with the hunk of stale bread we give you every day in your cell? Well instead of pissing in it every day, we’ll only do it on Mondays, Wednesdays, Thursdays, Fridays, Saturdays and Sundays. Can’t say fairer than that, can we? That’s the whole of Tuesday we’re offering without a trace of urine in your soup. When the Czechs and the Latvians and the Poles get to hear of this deal they’ll kick up a massive stink. But don’t worry, we’ll square it with them. Because we care.”

Poor Dave, of course, had been hoping for a bit more substantial than that. Instead, he came up from his 2016 whistlestop tour of all the EU member states, with a set of concessions so pitiful it made Neville Chamberlain’s piece of paper from Adolf Hitler look like the deal of the century.

The only gift the EU was prepared to offer Dave was a giant, ribboned freebie for Nigel Farage and Jacob Rees-Mogg.

Farage got to laugh the offer out of court for the meaningless sop it was.

Rees-Mogg to to make one of his more withering statements to the House of Commons:

“My Right Honourable friend has a fortnight, I think, in which to salvage his reputation as a negotiator.”

But what did he expect? The message that came across from the various EU bosses and heads of state interviewed on the documentary could not have been clearer or more unanimous. It boiled down to: we don’t do negotiations.

Former French President François Hollande summed it up well. Dave entertained him at Chequers — the Prime Minister’s private country residence — which is full of historical relics which used to belong to Napoleon (gifted by a former Prime Minister, the Duke of Wellington). But despite the schmoozing and the nostalgia trip to the brief period when France counted for something, Hollande could offer nothing in return.

As he explained on the documentary:

“Any concessions made to the UK on freedom of movement in the EU would be equally requested by other member states. I said to him honestly, if he got a special deal for the UK… then other countries under populist pressure would try to organise their own referendums.”

Note that characteristic contempt of the Euro elite for the ordinary people — “populist pressure”.

But what Hollande is saying here, at least from the EU’s perspective, is absolutely logical and makes perfect sense.

The EU is not a club which retains its members by keeping them happy and rewarding them with all manner of perks. It’s run much more like a prison, in which the benefits of staying in consist largely of incentives like: “Well if you don’t try to escape, we won’t shoot you…”

Compared to some of the members of the Euro elite interviewed, Hollande was positively charming.

The reptilian lush Jean Claude Juncker, sounded like a slightly less reasonable Don Corleone when he described some pettifogging concession he had made to Cameron.

“I said ‘This is the price to pay. I didn’t like the price. But my feeling was that we had to agree.”

To put it another way, even when offering Cameron next to zilch — just the right, for seven years, not to have to pay welfare for EU immigrants; exemption from ever-closer union; a promise not to destroy the City of London (which probably wasn’t in the EU’s power anyway) — the EU’s technocratic elite insisted on playing the hardest of hard ball, keeping Cameron waiting and making him beg.

Angela Merkel, for example, kept Cameron and his negotiating team waiting 26 hours before leading a delegation straight to his room with barely a second’s notice. “Is David here?” she asked. Then grudgingly gave him a tiny bowl of watered down gruel which no way was Dave going to be able to sell to a British public ravening for roast beef and all the trimmings.

These people our enemies. Never forget this. We have no beef with the people of France or Germany or any other European state — I certainly don’t. But the leaders involved in the European project are different: jumped up little tics like Nicolas Sarkozy and Emmanuel Macron, though they may not look it, are every bit as great a threat to our sovereignty and independence and freedoms as Napoleon was; Chancellor Merkel, in her mumsy, patronising way, is really no more friendly to Britain’s national interest than one of her toothbrush-moustached predecessors was. The fact that they don’t threaten us with force of arms is just a reflection of their preferred methodology and of the times — not of their intentions. They mean to crush us and bend us to their will not with Voltigeurs and Imperial Guard en ligne or with Stuka bombers, this time, but with endless red tape and directives.

We’ve beaten these bastards before — many, many times more than they have beaten us. We can beat them again.

This is an independence war we are fighting for the future of our country. In such circumstances, almost any amount of inconvenience, even suffering, is worth it for the end prize of victory — and freedom.