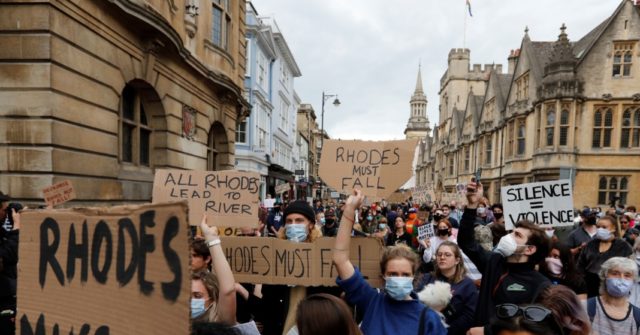 Perhaps not since the era of Oliver Cromwell, when Puritans smashed and burned any work of art or architecture they deemed impure, has Britain engaged in such a frenzy of iconoclasm.

Across the country, mobs of petty tyrants, puffed up with self-righteousness and moral fervour, are plotting which little piece of British history they can vandalise or destroy next. Ironic, perhaps, given Oliver Cromwell himself is now on the list of condemned statues.

In Bristol they have already succeeded with the statue of 17th-century merchant, slaver and city benefactor Edward Colston (whose statue – with the apparent acquiescence of Bristol police), they pulled from its plinth and dragged into the sea.

In London, they spray-painted (‘Racist’) a statue of Winston Churchill in Parliament Square. The statue remains upright, so far. But today they had better luck in East London with a statue of Robert Milligan, another slave trader, which was torn down from its plinth on the orders of the Canal and River Trust — supposedly in response to public demand. (There was a petition with a fairly modest 3,000 signatures)

In Oxford, they’ve revived the long-simmering campaign (copied from mob tactics used in Cape Town, South Africa) to remove a statue of Cecil Rhodes from Oriel College. Hundreds of undergraduates chanted ‘take it down’, blocked the High Street with a sit-down protest during which all but one of them took a knee for eight minutes, 46 seconds in solidarity with George Floyd…

Peter Hitchens at the #RhodesMustFall protest in Oxford. #NoKneeling pic.twitter.com/bBJ9fj5sfX

Here is another rare voice of dissent. She describes herself in her Twitter profile as a ‘feminist’ and a ‘Black Lives Matter’ supporter. But she recognises the irony of using racial injustice as an excuse to destroy a statue dedicated to the man who founded the Rhodes bursaries which now enable black African students to study at Oxford.

#RhodesMustFall I don’t agree with this. This is history! Awful things happened, we all acknowledge that & must work together for a better future for all. I just wonder how many Zambians & Zimbabweans support this considering they’re the beneficiaries of the Rhodes bursary!?

But she is the exception, not the rule. Many of those campaigning for the destruction of Oxford’s architectural heritage were themselves lucky enough to spend three years or more among the university’s dreaming spires. They don’t seem to have benefited much from the educational and cultural experience, though. Nor do they seem to have had their minds opened.

Here is one of the more notorious among them, left-wing activist Owen Jones.

Big up everyone in Oxford demanding @OrielOxford take down the statue of mass murdering white supremacist Cecil Rhodes. You are educating the nation: without confronting our past, we can’t overcome today’s racism #RhodesMustFall pic.twitter.com/MEHdQUospA

And here is a left-wing professor, who sometimes takes time away from tweeting Marxist agitprop to teach at Oxford, chipping in her hot take on this ‘fearless’ vandalism.

Where #RhodesMustFall all began. At the University of Cape Town. And the fearless students and staff fighting for justice and respect in 2015. Grateful that others were inspired and motivated by their actions and vision.

What a shame that these vandals aren’t better versed in the history of iconoclasm. They could start by reading this superb essay — Iconoclasm and the Erasing of History — by art historian Alexander Adams.

The political activist reserves to himself the right to retrospectively edit our history for his satisfaction by removing monuments, those fixtures of civic life, embedded in the memories of generations. The activist often knows almost nothing about the object of his hatred—merely a garbled caricature of a person caught up in the conditions of her age…

It has a long, ugly history, embracing such bouts of wanton destruction and violence as Mao’s Cultural Revolution:

Buddhist and Confucian temples were razed, scrolls and books burned, statues smashed, paintings destroyed. The noble dead were dug from the earth, publicly hacked to pieces and the fragments burned. All feudal names were changed. Yongyi Song writes, “By the end of the Cultural Revolution, 4,922 of the 6,843 officially designated ‘places of cultural or historical interest’ in Beijing had been destroyed.”

Look at mobs which gather to smash monuments. These monuments may be the statues of deposed dictators who terrorized populations, causing untold death and suffering. They may be monuments to fallen soldiers who died defending causes that are no longer fashionable. The mob’s anger is the same. The viciousness and triumphant celebrations are the same.

And it almost inevitably tends towards greater violence:

The activists of today heedlessly erase history they haven’t yet learned to read. They act as the hammer that extremists use to deface the cathedrals and museums our ancestors built.

Could this hammer soon be turned from smashing statues to killing people? It has happened before.

James Delingpole is the host of the Delingpod podcast. You can support him on Patreon, which will shortly feature his interview with Alexander Adams.