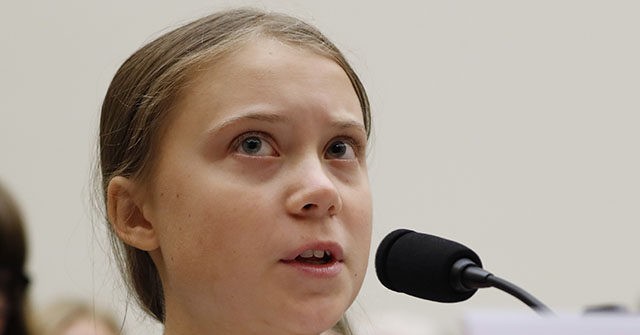 “I want you to unite behind the science,” said Greta Thunberg to the House Committee on Foreign Affairs and Select Committee on the Climate Crisis.

Finally, something on which the pig-tailed 16-year-old Swedish climate activist and I can agree. I too believe passionately that if the world’s governments are going to spend upwards of $1.5 trillion of our money a year on ‘combating climate change’ then at least they ought to have some credible evidence that this expenditure is necessary.

Perhaps, I thought, some of this credible evidence might be presented at today’s Climate Crisis Hearing, subtitled ‘Voices Leading the Next Generation on the Global Climate Crisis.’

Instead, all that I heard was the usual junk science, fake statistics, left-wing agitprop, and scaremongering nonsense regurgitated by kids — some claiming to have mental health issues — who’d been brainwashed at school by their left-wing, know-nothing teachers.

Here are just a few of the lies I spotted. My comments are italicised.

These are weather events, not climate events. They have happened since time immemorial.

“…with increasing frequency and intensity.”

There is no evidence of this. On the contrary, we know, for example, that hurricane activity is currently at a historic low.

Not a single person, anywhere in the world, has migrated anywhere due to sea level rise.

“Threats to food and water.”

Increased CO2 levels are greening the planet. The misuse of agricultural land to grow biofuels poses a far bigger threat to global food supplies than climate change. There is no evidence that climate change has affected water supplies.

“This is the reality we are facing right now because of climate change.”

This is a reality which exists only in the parallel universe occupied by Democrats and RINO Republicans.

America knows how to lead in a crisis.

There IS no climate crisis.

Our witnesses would be happily and safer in school pursuing their dreams — not protesting and pushing their governments to act — if everyone were doing their part.

Your witnesses certainly SHOULD be in school. The fact that they are sitting here today and being encouraged to emotionally blackmail Congress into taking action, which will almost certainly make life worse, not better, for future generations, is little short of disgraceful.

It’s high time we picked up this fight and took the rest of the world with us. Waiting for other countries to do the right thing is making a bad bet on our future.

Unilateral disarmament was a bad idea during the Cold War arms race. It’s just as bad an idea with regards to CO2 emissions. China and India are rapidly expanding their economies regardless of CO2. Why should America hamstring its own economy when others are growing? This, essentially, is why President Trump pulled the U.S. out of the Paris Accord.

The IPCC report warns us that without cuts in carbon emissions the world could see an average sea level rise of 62 centimetres over the course of the lifetime of people born today. That’s over two feet. Scientists are gravely concerned that sea level rise could be even faster.

Sea levels rose by around 1.9 mm per year during the 20th century and have risen by around 1.8 mm per year since 1970. That’s 18 mm per decade, so 180 mm per century — or just 18 cm. You’d need a pretty massive increase in current trends to get anything close to a two-foot rise — and there is no evidence that this is happening or likely to happen.

Climate change is real, and the best way to combat it is reducing our nation’s carbon emissions and that of the rest of the world.

Climate has been changing for the last 4.5 billion years; it’s true. There is no convincing evidence to suggest that man-made CO2 — ‘carbon’ — is significantly responsible. CO2 is not some magical control knob.

“Diversification,” “Market-driven technologies,” “Put the United States at the forefront of environmental technology.”

This is just the specious, faux-market language lawmakers use to try to persuade you that there’s nothing sinister about redirecting the entire economy towards the green decarbonisation scam.

“Burning fossil fuels warms the planet and alters the earth’s climate. Scientists tell us that more than half of the carbon pollution that has been emitted into the atmosphere has occurred since that [first Congress] hearing [on Climate Change] in 1988.”

Carbon dioxide is a beneficial trace gas that greens the planet. Rebranding it ‘pollution’ is a lie. Since there is no evidence that anthropogenic CO2 is significantly warming the planet, there is no reason to worry about increases in atmospheric CO2.

“Lobbyists from corporations that make billions of dollars off the destruction of my generation’s future.”

Leftist bullshit. The most dangerous lobbyists are those for the expensive, ineffective, environmentally damaging renewables industry. It’s much-scorned fossil fuels, which power the economy, keep hospital machinery working, get kids get to school, provide the synthetic material for the anoraks worn by idiot kids at climate protests…

“I want the entirety of Congress to remember the fear and despair that my generation lives with every day and I want you to hold on to it.”

Jamie is a tragic and pitiful indictment of the climate propaganda, which has deprived impressionable kids of their happy carefree childhoods by filling their heads with complete nonsense.
“Within my lifetime the destruction we have seen from the climate crisis will only get worse.”

“The reality is my generation has been committed to a planet that is collapsing.”

Kids who think this should lay off the weed.

“The shellfish, orcas, salmon, and all the beautiful wildlife of my Pacific Northwest home is dying due to ocean acidification caused by the climate crisis”

Absolute nonsense, no matter how much of a stroppy, sulky teenager look you wear when you say this stuff. Ocean acidification is a green propaganda lie. [See this article for details] The oceans remain resolutely alkaline. There is no evidence that this non-existent phenomenon is killing shellfish, let alone killer whales. Why is Congress wasting its time listening to this second-hand propaganda?

“Despite overwhelming adversity we organised our community and emancipated ourselves to protect our future. However the struggle continues for me and my people. As temperatures increase, sea levels rise, storms become more intense and frequent, and the coral reefs and fisheries on which we depend disappear, the oceanfront land that my family has inhabited for generations and that I’m supposed to inherit will be underwater if the U.S. federal government continues to promote a fossil fuel-based energy system.”

Just in case you ever doubted that green is the new red. This Marxist revolutionary language gives the game away.

“These frontline communities around the world are already feeling the effects disproportionately. These are made up of people like me: young, black and brown, LGBTQ, indigenous communities that place them at significantly higher risk than the general populace.”

Identity politics, too. This kid has been listening to too much leftist agitprop.

“I myself have felt the consequences of climate change directly. Growing up in New York I was impacted by the climate change-fueled Hurricane Sandy, which left my family and school without power.”

Sandy was not caused or exacerbated by ‘global warming.’ This is a leftist urban myth.

“I still experience grave anxiety about experiencing another climate driven disaster. As someone who already struggles with anxiety and depression…”

Sorry kid but your modish mental health issues are not a reason to hamstring the U.S. economy with pointless green regulation.

The first sense talked by any of the kids addressing Congress today.

“This whole thing is a charade. When you look at science, Miss Thunberg, when you look at facts, the facts are it wasn’t Waxman-Markey legislation that led to the U.S. leading the world in emissions reduction. It was actually folks doing the right thing. Through innovation, through energy efficiency, through conservation.”

“We are facing an existential threat…an exacerbation of conflicts abroad are a threat to us all.”

The ‘climate change causes wars’ meme is another greenie/leftist urban myth. See, for example, my piece called “For The Last Time, No, The Syrian Crisis Was Not Caused By Climate Change.”

“People don’t seem to be very aware of the actual science.”

And guess which pig-tailed 16-year-old climate activist and school dropout is one of the worst offenders in this regard…?