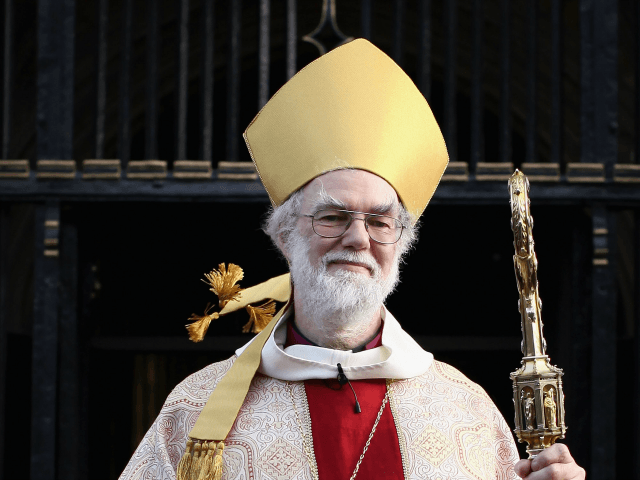 Former Archbishop of Canterbury Rowan Williams has joined calls for a popular uprising to protest against the “unprecedented global emergency” of climate change.

Williams is among 94 scientists, politicians, academics, and green activists who have written to The Guardian in support of the campaign of civil disobedience, led by a group called Extinction Rebellion.

“Are you interested in going to jail?” asks a call to arms by the group in the Ecologist.

Extinction Rebellion’s own website is even less oblique about its revolutionary aims:

From the 31 October citizens of this country will commit repeated acts of disruptive, non-violent civil disobedience. There will be mass arrests.

We demand the UK declares a state of emergency, takes action to create a zero carbon economy by 2025, and creates a national assembly of ordinary people to decide what our zero carbon future will look like.

We are willing to make personal sacrifices. We are prepared to be arrested and to go to prison. We will lead by example, to inspire similar actions around the world. This requires a global effort but we believe it must begin in the UK, today, where the industrial revolution began.

We will not be led quietly to annihilation by the elites and politicians. We will fight their genocidal behaviour with honour, resilience, and peace, in the spirit of all those who fought for our freedoms before us. We call on everyone, regardless of your political beliefs to join us in fighting for our nation and life on earth.

The immediate aim, according to the group’s co-founder Gail Bradbrook, is to get as many protestors in jail as possible.

The evidence is overwhelming: change comes when people are willing to commit acts of peaceful civil disobedience.

They must be disruptive and sacrificial and whilst a critical mass is needed, it is a relatively low number of people. Fifty people in jail for a short time, such as a week on remand, is likely to bring the ecological crisis into the public consciousness.

A few thousand arrests in a short space of time could cause a political crisis. Just a tiny percent of the population in active support of a rebellion would probably see an end to this destructive political system.

Although most of the signatories of the Guardian letter are obscure, the large number of Professors and Assistant Professors on the list — from universities including Oxford, Cambridge, Edinburgh, Bristol, King’s College London, and Exeter — gives an indication of just how heavily deep green ideology has infected academe. Few on the list are actively involved in studying climate science. Most are in very peripheral fields such as leadership studies, psychology, psychotherapy, critical theory and — your tax dollar at work — “ecological linguistics”.

Disturbingly, one of the “experts” Extinction Rebellion cites in support of its revolutionary tactics is a NASA scientist.

Dr Kate Marvel from NASA’s Goddard Institute said: “To be a climate scientist is to be an active participant in a slow-motion horror story.

“As a climate scientist, I am often asked to talk about hope […] Audiences want to be told that everything will be alright in the end […] The problem is, I don’t have any. We need courage, not hope.”

Another of their ideological role models is the notorious left-wing political activist Joachim Schellnhuber.

As I’ve written here before:

Though little known outside climate alarmist circles, Schellnhuber is one of the chief architects of the great global warming scare. Schellnhuber, a Gaia-worshipping Malthusian who once claimed that earth has a “carrying capacity” of just one billion – meaning, presumably, the rest of us (now approaching eight billion) are redundant – is the man who invented the (completely arbitrary) 2 degrees Celsius “tipping point.” This claim, regularly cited at UN climate conferences, posits that if  “global warming” is allowed to increase by more than 2 degrees Celsius above pre-industrial levels then it will result in unstoppable climate catastrophe. There is no scientific evidence to back this up. It’s just an arbitrary figure, plucked from the air, in order to scare politicians into “decarbonising” their economies and embracing renewables. Yet now the alarmist community and all the senior figures Schellnhuber advises – among them, Germany’s Chancellor Angela Merkel and Pope Francis – treat these made up facts as gospel.

Yet, inevitably, these eco-loons take his word as gospel. As Bradbrook writes in her article for the Ecologist:

Scientists are increasingly breaking ranks to emphasise the existential threat we are facing.

Prof. Hans Joachim Schellnhuber, the head of the Potsdam Institute for Climate Impact Research for twenty years and a senior advisor to  the European Union, said: “Climate change is now reaching the end-game, where very soon humanity must choose between taking unprecedented action and accepting that it has been left too late and bear the consequences.”

The Extinction Rebellion is urging people to face up to this hellish reality, particularly the “biological annihilation” of this mass species extinction event.

We acknowledge the grief and fear this can cause. But our experience suggests that working through those painful feelings can lead to a new determination to do whatever it takes to make this a lesser catastrophe and to save what we can.

These loons mean business. What’s extraordinary is how seriously they’re being taken by people — ex-Archbishop of Canterbury, anyone? — who really should know better.