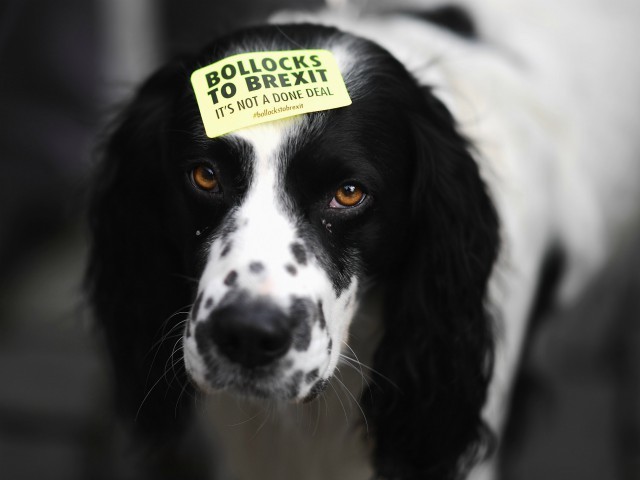 This Brexit is a dog’s breakfast of a cock-up of a disaster of a fiasco.

I’ve been looking for guidance from some wise columnist who can explain what is happening and then reassure me that it’s all going to be OK in the end. But such a person does not exist for the simple reason that no one knows anything: everything is up in the air, everybody is lying, cheating or on manoeuvres, everyone is partisan and betraying their own biases and wishful thinking. That’s why I feel free to offer my own hot takes on the issue, confident that no one can gainsay me because my guesses are as good as anyone else’s.

Here is where I think we are:

Her decision to postpone her inevitable defenestration by delaying yesterday’s “meaningful vote” in Parliament because she knew she was bound to lose was entirely in character. May’s sole interest now is staying in power by whatever means. It’s not as though she didn’t warn us.

“I am a bloody difficult woman”, she once famously claimed. What she should have added is: “I am also a bloody annoying woman.”

It’s not just that grating, two-note rasp-honky voice and those bizarro fashion choices she makes. It’s the grinding relentlessness and this extraordinary shamelessness she has, whereby, despite being a vicar’s daughter whose only supposedly naughty act was running through a field of wheat, she can lie with such pathological ease.

She promised Parliament the meaningful vote — and then casually whipped it away at a moment’s notice (treacherously telling Brussels her plan 24 hours before she told her own ministers). She claims that her Checkers plan fulfils her predecessor’s promise to honour the Brexit referendum result: it clearly doesn’t.  She says she just wants to get on with it — but then just dithers, delays and prevaricates.

Useless, utterly useless. The received wisdom on the Conservative Party is that it’s the historically-proven natural party of government: skilled at building a popular consensus with its broad church pragmatism, expert at undoing the damage inevitably done when the public has one of its periodic flirtations with Labour, ruthless when it comes to ditching party leaders who are not fit for purpose.

But here it is, with Britain facing the greatest challenge to its political and economic integrity since the Second World War, and the Conservative Party is proving as worthless as a chocolate fireguard. “I’ve never felt more ashamed to be a Conservative” writes Allison Pearson in the Telegraph, going on to describe May’s Brexit negotiations as “a mule flogging a dead horse.” I agree.

Which part of “Betray Brexit and your party will be destroyed” do these Conservative MPs not understand?

The Backstop
Really this should be known as the MacGuffin — because that is what it is. A plot device with little or no narrative explanation inserted into the story line purely to advance the scriptwriter’s ends. The scriptwriter in this case, of course, is the European Union.

Who was it that turned the routine, unproblematic, eminently manageable customs arrangements between the Northern Irish and Irish borders into such a major obstacle? The EU — in cahoots with its anti-British puppet Leo Varadkar and sundry Remainer civil servants and ministers.

They plucked this imaginary problem out of thin air in order to stymie the negotiations. And instead of saying: “Bog off! The British don’t want to put up a hard border and the Irish don’t want to put up a hard border so there’s not going to be a hard border — what is your problem?”, our negotiators — taking their lead from chief Surrender Monkey Theresa May — have played along with it. By acquiescing with the enemy’s terms, they have turned a fake problem into a real problem.

Here’s my biggest fear right now: that we are about to be stitched up by the Establishment and given a spavined, milksop Brexit In Name Only which bears no resemblance to what 17.4 million Britons voted for in June 2016. And it’s all because of that “Backstop”.

I’ve read several of our supposedly more hardcore Brexiteers — from Charles Moore in the Spectator and the Telegraph — arguing recently that the absolute sticking point in the negotiations, the one that no self-respecting Brexiteer should ever accept, is the Backstop because it enables the EU to drive a wedge through the United Kingdom. But by saying this, they immediately concede the notion that there are other forms of compromise that are acceptable.

Forget all the confusing details about the Single Market and the Customs Union and the Backstop, the bottom line is this: if in March 2019, Britain finds itself “leaving” the EU but still constrained by its court rulings and unable to negotiate whichever trading deals it wants with whatever non-EU member states it wants, then democracy has lost, the British people have been betrayed, and the Remain Establishment has won.

Last weekend’s Brexit Betrayal March was just a polite dress rehearsal. Liberal commentators such as Tanya Gold at UnHerd may deplore the fact that marchers brandished placards like “Treason May — your ‘deal’ is Brexshit” and portable sets of gallows. But I’m afraid that this is nothing compared to what’s coming if the British people don’t get the Brexit they voted for. (And unlike those in the Westminster Bubble, the British people do know exactly what it is they voted for.)

We all remember how wonderful it felt that morning of June 24, 2016 — that sense of liberation and optimism, combined with satisfaction that finally the out-of-touch, anti-democratic, politically correct liberal Establishment had been put back in its box. Only a blinkered fool would imagine that the liberal Establishment can snatch away that victory without consequence.

Sure, we are not as prone to rioting and revolution as the French. But Brexit was our moment: our Agincourt. We won. We’re not going to give that territory back without one almighty fight. Does the liberal Establishment really not understand this?

The European Union to the Rescue
My biggest hope lies with the European Union. If we accept — as surely we must — that the only acceptable deal now is a “No deal” exit, then it follows that the biggest threat to it right now is the possibility that Theresa May manages to come back from the EU with some watered down version of her Chequers Plan which is acceptable to Parliament.

I reckon that if the EU can be persuaded to ditch the Backstop — or at least, to include a clause reassuring Britain that it will only exist for a limited period — then May will get away with it. The fear among Conservative Brexiteer MPs of a Corbyn government will override their yearning for a full Brexit. How can we stop this happening? We can’t. Ironically, our only hope may be the supreme vindictiveness of the EU and its known determination to give Britain the worst possible deal in order to put off any of the prison’s other inmates from trying to escape.

It has made this mistake once before: when David Cameron was prime minister and went cap in hand to the EU begging for something, anything he could show his electorate back home to put them off voting for Brexit the EU responded with a big fat nothing. Unless the EU is capable of learning from its mistakes, for which there is little evidence, it seems quite possible that the EU will insist on the Backstop to the bitter end — making No Deal that much more likely. We can but hope.

Since I began this epic, rumours have started circulating in the Westminster bubble that finally, FINALLY, the European Reform Group of Conservative MPs has come up with the requisite number of letters to trigger a no-confidence vote in Theresa May. Let’s hope they get the right result, that May is kicked out and a red-meat Brexiteer wins the party leadership. Otherwise, all bets on the prosperity, security and independence of the United Kingdom are off…