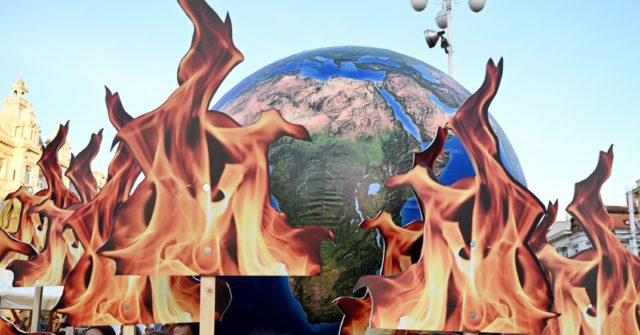 On the eve of the COP26 climate summit debacle comes a convenient study: the “consensus” on man-made climate change has apparently rocketed to “greater than 99 per cent.”

I’m old enough to remember when the scientific consensus that the planet was doomed thanks to man’s selfishness, greed and refusal to amend his carbon-guzzling lifestyle was a mere “97 per cent”.

That extra two-and-a-bit per cent could make all the difference. So the burning world owes a huge debt of gratitude to the creative team responsible for this “study”, led by climate activist Mark Lynas.

This study is titled Greater than 99% consensus on human caused climate change in the peer-reviewed scientific literature.

Here, just in case you thought it was a Mickey Mouse document cooked up for green political purposes, is its sciency-sounding abstract:

While controls over the Earth’s climate system have undergone rigorous hypothesis-testing since the 1800s, questions over the scientific consensus of the role of human activities in modern climate change continue to arise in public settings. We update previous efforts to quantify the scientific consensus on climate change by searching the recent literature for papers sceptical of anthropogenic-caused global warming. From a dataset of 88,125 climate-related papers published since 2012, when this question was last addressed comprehensively, we examine a randomized subset of 3,000 such publications. We also use a second sample-weighted approach that was specifically biased with keywords to help identify any sceptical peer-reviewed papers in the whole dataset. We identify four sceptical papers out of the sub-set of 3,000, as evidenced by abstracts that were rated as implicitly or explicitly sceptical of human-caused global warming. In our sample utilizing pre-identified sceptical keywords we found 28 papers that were implicitly or explicitly sceptical. We conclude with high statistical confidence that the scientific consensus on human-caused contemporary climate change — expressed as a proportion of the total publications — exceeds 99 per cent in the peer-reviewed scientific literature.

Lynas, the lead author of the report, is a History and Politics graduate who has built a fine career on promulgating the fashionable climate doom narrative.

He is probably more famous for his stunts than his scholarship.

For example, in 2001 he attacked the Skeptical Environmentalist, Bjørn Lomborg, with a cream pie.

And in 2009 he wangled himself a gig working for the then-president of the Maldives. Lynas arranged the publicity stunt in which the Maldives government was photographed staging a cabinet meeting underwater — in order to symbolise the islands’ supposedly imminent inundation due to climate change.

Characteristically, both of these attention-grabbing stunts acted in the service of a big fat lie.

In the case of Lomborg, the big fat lie was that his book was somehow dishonest or irresponsible when in fact it was thoroughly researched.

In the case of the Maldives, the big fat lie was that the Maldives were under imminent threat from “climate change” — for which there seems to be little if any real-world evidence. Would a nation about to sink beneath the waves would hardly be building so many new airports?

Perhaps that is one reason why we should take Lynas’s latest effort with a similar pinch of salt. Sure, he may have finagled the fancy title ‘Visiting Fellow, Cornell University, Global Development, Alliance for Science’. But what is this “study” telling us that is remotely scientific?

Let’s assume that the study’s methodology is correct and that more than 99 per cent of all peer-reviewed scientific literature supports the “consensus” on global warming: doesn’t that prove the opposite of what Lynas et al. are trying to prove?

They want us to believe that “the science” is settled beyond all doubt:

According to the IPCC AR6 summary and many other previous studies, mitigating future warming requires urgent efforts to eliminate fossil fuels combustion and other major sources of anthropogenic greenhouse gas emissions. Our study helps confirm that there is no remaining scientific uncertainty about the urgency and gravity of this task.

But all they have actually demonstrated is that in the field of climate change, sceptical voices have simply been purged out of existence.

It’s not that there aren’t lots of scientists sceptical about the climate alarmist narrative. I’ve spoken to many of them and written about their papers in numerous articles for Breitbart and elsewhere. But, increasingly, they find it all but impossible to get their work published in peer-reviewed journals because all the key publications have been hijacked by ideologues who act as gatekeepers whose job is to police and exclude wrongthink.

This has been evident since at least the 2007 Climategate scandal. Since then it appears to have got much worse, to the point where you could argue there’s really no longer such a thing as climate “science” — only climate orthodoxy.