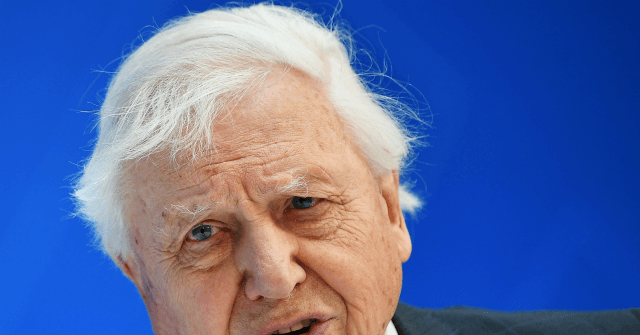 The increasingly unwatchable and slavishly woke BBC plumbed new depths last night. It gave a prime time slot to a piece of environmental propaganda so blatant, shameless, and dishonest it might just as well have been a political broadcast on behalf of Extinction Rebellion.

Even the programme’s title was a lie.

Climate Change: The Facts was a farrago of alarmist cliches, exaggerations, and untruths which have been debunked on numerous occasions.

Yet many viewers may well have been taken in because the programme was presented with breathy earnestness and apparent authority by the doyen of TV wildlife ‘experts’ Sir David Attenborough. And accompanied by the kind of dramatic footage and stirring music guaranteed to bypass the brain and appeal directly to the emotions — as all the most effective propaganda does.

“If you liked Triumph of the Will then you’re going to love Our Planet,” I wrote recently of Attenborough’s new Netflix series, which uses exactly the same techniques: amazing nature photography; manipulative music; a trembly voiceover making all manner of scientifically dubious assertions in order to scare the viewer into the appropriate state of climate fear.

But Climate Change: the Facts was more unscrupulous and dishonest still.

What I found particularly objectionable was its use of emotive trickery to help deceive the viewer into buying its specious arguments.

For example, on the subject of heatwaves, we were shown heartbreaking footage of thousands of flying foxes (giant fruit bats) in Australia which had dropped dead out of the trees during a particularly hot spell last November in Queensland.

“There was a deafening sound of babies crying,” said the voiceover of a distraught Australian conservationist, over images of piles of dead bats, and an orphaned baby bat being hand fed some milk from a bottle.

“This is climate change in action,” muttered an unnamed Australian.

“We need to wake up!” said another.

The unwary viewer might easily have been gulled into drawing two erroneous conclusions from this.

First, that the bats really had been killed by “climate change”. (Which they hadn’t. This was an extreme weather event of the kind which, no doubt, has killed many thousands of flying foxes on previous occasions in history — only without the presence of camera crews to record the incidents.)

Second, that the world divides into two kinds of people: those who love the planet and cute baby bats and who consequently believe in the urgency of combating climate change; those who don’t give a damn. (Which is another entirely false premise. It is quite possible to care very much about the natural world without buying into the false claims of green-ideology driven, anti-growth, anti-human environmental activists.)

Paul Homewood has been through its various claims with a fine-tooth comb and found many to be misleading and inaccurate.

In sum, where in reality there is increasing doubt and debate among scientists on the issue of ‘climate change’, this #fakenews documentary pretended the opposite: that the weight of evidence points unquestionably to an imminent climate catastrophe which can only be averted if we take concerted global action now.

“It may sound frightening but the scientific evidence is that if we have not taken dramatic action in the next decade we could face irreversible damage to the natural world — and the collapse of our societies,” said Attenborough. [Fact check: there is not a single piece of scientific evidence which suggests anything of the kind. Perhaps that’s why he covered himself with the word “could.”]

“What is happening now in the next few years will profoundly affect the next thousand years,” he declared elsewhere. [Fact check: no it won’t; barely in the slightest. The planet is 4.5 billion years old. It’s perfectly capable of taking care of itself, regardless of our ludicrous delusions otherwise.]

This isn’t science. This is the purest political activism — and it’s quite extraordinary that the BBC, theoretically committed by its charter obligations to fair and accurate broadcasting, should have allowed itself to be used as a platform for such blatant fearmongering, misinformation, and propagandising.

The BBC supposedly represents the entire viewing population. (Otherwise, why should we all be forced to fund it with our compulsory annual £154.50 per household licence fee?) Yet here it is speaking on behalf of a narrow clique of mostly metropolitan, left-liberal types who pay lip service to the green religion because it’s such an easy way of publicly signalling their virtue. Those many of us — perhaps the majority of the population — who, with good reason, are sceptical about the global warming scare are treated with utter contempt, as if our opinions don’t matter.

Anyone with an even rudimentary grasp of the climate debate knows, for example, that Michael Mann, James Hansen, and Naomi Oreskes are key members of the climate industrial complex with a long track record of aggressive political activism on behalf of the environmental movement. Yet here they were being presented by the BBC — and by Attenborough — as if they were dispassionate, wholly trustworthy climate experts.

Even by the BBC’s abysmal standards, this programme was a disgrace: an insult to the intelligence, a betrayal of the Reithian principles on which the BBC was founded, and a shameless piece of propaganda on behalf of the watermelons who would destroy our civilisation.

As for Sir David Attenborough, it’s time this whispery voiced, gorilla hugging, walrus scaring Malthusian was recognised for what he is: not as a national treasure but as a national embarrassment long, long past his sell-by date.