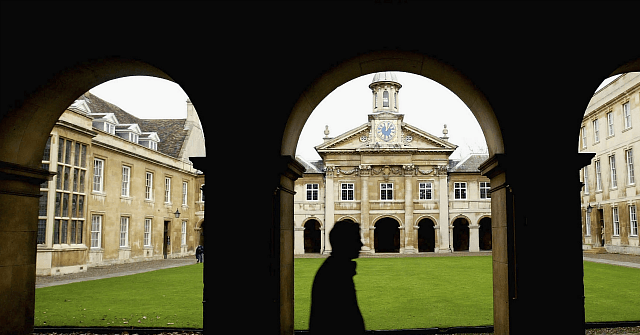 Cambridge University, formerly a respected seat of learning, has booted out a young scholar for daring to champion the cause of free inquiry.

According to a statement initially released by the college but now deleted from its website, Dr Carl had his research fellowship terminated because his work was “problematic”.

“The poor scholarship of this problematic body of Dr Carl’s work, among other things, meant that it fell outside any protection that might otherwise be claimed for academic freedom of speech.”

“…the panel found that, in the course of pursuing this problematic work, Dr Carl had collaborated with a number of individuals who were known to hold extremist views. There was a serious risk that Dr Carl’s appointment could lead, directly or indirectly, to the College being used as a platform to promote views that could incite racial or religious hatred, and bring the College into disrepute.”

These claims are, of course, self-serving, disingenuous, and quite possibly libellous nonsense.

The real reason Dr Carl was sacked was because the college authorities — led by a privately-educated millionaire, former banker, and son of an ennobled historian, called the Hon. Matthew Bullock — caved to an orchestrated bully mob of left-wing academics.

Dr Carl had done nothing of the kind. The true reason for the left-wing mob’s ire was, as Quillette reported, that he had defended the cause of intellectual inquiry into areas that the left would prefer to keep taboo.

Dr Carl’s crime is that he has defended intelligence researchers who’ve written about the taboo topics of race, genes and IQ and argued that stifling debate in these areas is likely to cause more harm than allowing them to be freely discussed by academics. It appears to be this, and the fact that he spoke at the London Conference of Intelligence in 2017 alongside some of these researchers (although he did not himself speak about race, genes or IQ at that conference), that is the basis for the accusation, made in the letter, that he is guilty of “pseudoscientific racism.”

One of the signatories is Professor David Graeber, the anthropologist and left-wing political activist, who described Dr Carl on Twitter as a “very creepy ‘race scientist’.” When asked to justify this accusation of racism and clarify what aspects of Dr Carl’s research he found “methodologically flawed,” he replied: “that’s easy. The concepts “race” “genetic intelligence” and “criminality” are all concepts with at best questionable scientific validity, so any study that assumes all 3 as unproblematic is so wildly methodologically flawed that one can only assume a racist motive in the author.”

As Clare Lehmann notes in a subsequent Quillette piece, this really isn’t a good look for Cambridge’s intellectual credibility:

Universities like Cambridge proudly resisted these assaults on intellectual freedom in the past — it was the home of such free thinkers as Erasmus, Charles Darwin and John Maynard Keynes. Indeed, protecting scholars from persecution by political and religious pressure became one of the defining purposes of the world’s great universities.

It was Cambridge, of course, which also recently rescinded the offer of a visiting fellowship to Jordan Peterson, on similarly spurious grounds.

But the rot has spread almost everywhere. Unless you could get your kid in to study somewhere like Hillsdale College in the United States, or, in the United Kingdom, maybe Durham, university is probably now a complete waste of time.

Peter Thiel has given a uniquely scathing critique of the insanity of this system. He questions whether higher education, as an economic exchange, represents much of an investment anymore—the student defers gratification to reap higher rewards in the future, or the student enjoys a four-year party as a consumption good. Thiel says he originally thought of higher education as consumption masquerading as investment, but now thinks of it as an even crazier combination of concepts: as insurance against failure in life in general, and as a kind of Veblen good that is priced uncompetitively so as to confer status on those who can afford it. This produces a ridiculous situation in which insurance is desirable, not because something disastrous is prudently insured against, but because the disaster would be the ignominy of failing to purchase insurance in the first place. It is effectively a Ponzi scheme. No wonder Thiel calls college administrators subprime mortgage brokers. They get a cut on selling pieces of paper that are only as valuable as we all pretend they are.

He’s right. Academia has disappeared up its own fundament. It no longer deserves to be respected or, indeed, taken seriously at all.