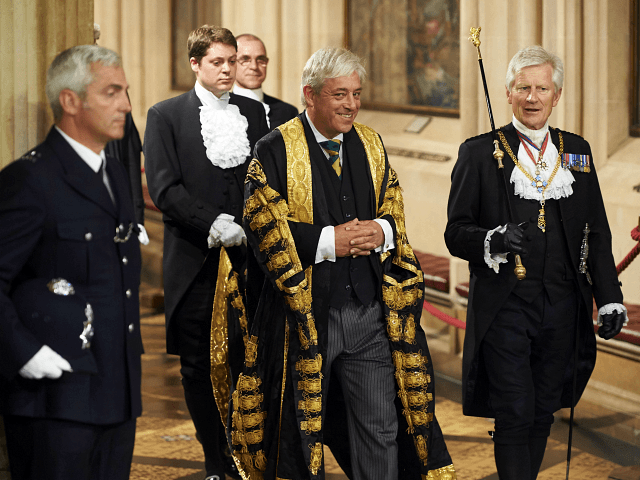 Just consider for a moment the last few days’ shenanigans in and around Parliament.

Next two extraordinary pieces of ad hoc legislation rushed through in the last few days, eagerly ushered in by the Remainer Speaker of the House John Bercow, and voted through by a Remainer-dominated Parliament, designed with the sole purpose of frustrating the “No Deal” Brexit that is now Britain’s only way of getting the full Brexit it voted for in June 2016.

The corruption, the abuse of process, the partisanship, the betrayal of the democratic process, the lies, the cant, the play-acting, the skullduggery have been so shameless and blatant as to beggar belief.

It’s no wonder the ordinary folk who voted Brexit are growing increasingly restive and bitter. The Remainer Establishment — or Deep State, if you prefer — is snatching Brexit away from them; and it’s so arrogant, so complacent, so contemptuous of the public that it’s scarcely bothering even to hide its tracks.

Take John Bercow. As Speaker of the House, he is supposed to be non-partisan. Bercow’s idea of non-partisanship where Brexit is concerned is to turn up to work in a car (with the personalised number plate B13RCO) with a rear window sticker that says “BOLLOCKS TO BREXIT.”

Bercow is an unpleasant piece of work — a “vicious, careerist, small-minded martinet”, as Quentin Letts once put it — who should have been forcibly ejected long ago from the Speaker’s chair he has repeatedly disgraced.

In October last year, it seemed finally as if the poisonous dwarf were going to get his comeuppance, after a damning report by Dame Laura Cox into bullying and harassment in Parliament.

As the Guardian reported:

The former judge said she found a culture of “deference, subservience, acquiescence and silence” and recommended that people in management roles, including Bercow, should consider their positions. The Speaker has been the subject of multiple bullying allegations, which he denies.

But instead of pursuing these allegations — which normally it would have done, especially in the post #MeToo witch hunt climate — our virtue-signalling parliamentarians have proved oddly reluctant to boot out this charmless bruiser. Why? Because Bercow has made it his business to sabotage Brexit and most MPs, whatever they may think of him personally, are Remainers.

Bercow, Tom Harris drily notes at Cap-X, is “about as even-handed and impartial on the matter of Brexit as Jacob Rees-Mogg.”

And Parliament’s support of this creepy character demonstrates the most shaming hypocrisy:

Virtually every Labour MP in the Commons, formerly proud advocates of women’s and workers’ rights to workplaces free from bullying, chose to suspend that particular principle last year when serious accusations against the Speaker, from more than one reliable source, emerged. Normally – and especially if such allegations had involved a Conservative minister – Labour would have demanded immediate action. But in Bercow’s case – as lucidly explained by Dame Margaret Beckett MP – the cause of opposing Brexit trumps any less important issue such as the rights of Commons members of staff.

As Isabel Hardman observes at the Spectator, Bercow has become a law unto himself.

Today Speaker Bercow told the House of Commons that he could disregard precedent and change procedure as he wished, while admitting that he hadn’t fully thought through the implications of this.

Imagine, for a moment, if the Speaker’s bias had been towards Brexit; imagine if the two MPs whose obstructive amendments the Speaker had encouraged had been ardent Brexiteers like, say, Jacob Rees-Mogg and Andrew Bridgen.

Can you imagine the scandalised response it would get from the BBC and most of the rest of the mainstream media?

There would be calls for Bercow’s resignation; endless “why oh why?” editorials about the decline of parliamentary standards; indignant commentary that Parliament’s sovereignty was being suborned by narrow cliques…

But because Bercow’s dirty tricks are in accord with where most of the Establishment is on Brexit — i.e. wanting it derailed by whatever means necessary — you’re scarcely going to hear a peep of protest…

…Except, of course, from those members of the silent majority who are feeling increasingly let down by a democratic system which they see so blatantly being rigged against them. They voted Brexit to get rid of this venal, self-serving Establishment. And here’s that venal, self-serving Establishment raising an elegant middle finger and saying to them: “Swivel, plebs!”

I do wish that bunch of “yellow vest” protestors hadn’t chased after Anna Soubry the other day. Not because I don’t sympathise with their frustration but because I think they are being played.

(Also, I’m sorry, but using insults like “Nazi” is just moronic. Apart from being inaccurate — there are plenty of more damning epithets you could reasonably use on Soubry — they’re just a gift to the enemy. I’m reminded of those idiots you occasionally see being caught at Tommy-Robinson-type rallies giving Nazi salutes. Yes, we know guys that you’re doing it sarcastically, in response to endless provocation from leftists doing Nazi salutes at you. But don’t you realise: that’s not how it’s going to look after the footage has been edited?)

There are lots of questions that remain unanswered about the Soubry/Nazi incident.

Why, given her claims to have felt threatened, did Soubry look so cheerfully unperturbed throughout?

How come two of Remain’s most rabid propagandists — Femi Sorry and Owen Jones — were so conveniently on hand to witness it?

Why was this non-story so quickly allowed to escalate across the media, to the point where – outrageously – comparisons were being invited to the murder of MP Jo Cox?

Why — given this was a non-violent, non-threatening incident of an order of magnitude smaller than the kind of snarling physical aggression displayed by left-wing demonstrators — were so many Conservative MPs prepared to pretend otherwise and elevate it to the status of Worst Thing That Has Been Done To An MP Evah?

And who exactly was the mysterious figure seen leading the insults against Soubry and filming her but then caught on camera passing something to her chief of staff, rather suggesting that they knew one another?

BREAKING: BEWARE #YellowVestsUK There may be undercover Police Officer in our mist.

He stirs up trouble at Speakers Corner (to get it shut down?) then he tries to fit with protestors heckling Soubry.

Until he’s videoed putting something in the pocket of Soubry’s Security man😲 pic.twitter.com/6FYjaTRXMX

I’m perfectly prepared to accept that there may be a rational explanation for all the above that doesn’t include the words “deep state conspiracy”.

But if there is, it must be bloody complicated…