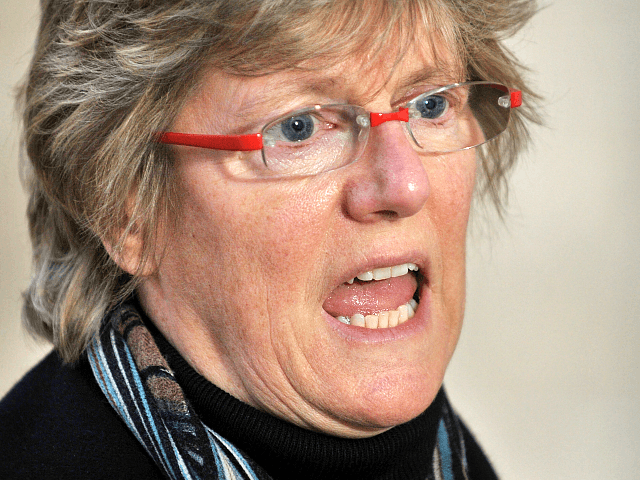 Davies is the embodiment of Nanny State meddling. So much so that only last December, she proudly referred to herself — for these jumped up bureaucrats have no shame — as the nation’s “chief nanny.”

This was in the context of swingeing demands she’d made — perfectly timed to ruin everyone’s Christmas — for more taxes on sugary soft drinks, on milky drinks, and on foods high in salt. The Nanny State in excelsis, waging war on people’s private pleasures and freedoms.

The “chief nanny” has form. In 2016, she declared that there is no safe limit on the amount of alcohol that can be drunk. She urged women “to do as I do and think about the risk of cancer before having a glass of wine.”

So how bizarre it was to hear this same woman on BBC Radio 4’s Today programme this week berating her interviewer Nick Robinson for “sexism” because he had used the word “nannying” to describe what she does.

According to the Mail:

Chief Medical Officer Dame Sally Davies chastised BBC Radio 4 presenter Nick Robinson after he used the term “nannying” during an interview with her this morning.

Clearly offended by the remark, the professor, who was on the show to discuss how much screen time is recommended by the government for children, said: “I wonder whether you would say that to a male Chief Medical Officer.”

On social media, some listeners of the Today programme said Dame Sally was right to pull up Robinson on his choice of words, with many accusing him of being “sexist”.

Two things need to be said on this point.

The first is that, yes, actually Robinson would almost certainly have used the term “nannying” for a male Chief Medical Officer as freely as for a female one. As Tim Worstall notes, Davies’s predecessor Sir Liam Donaldson was often given the “nannying” tag.

The second and more important one is: “What IS this woman like?” I mean, seriously. To call yourself “chief nanny” and then, only two months later, to feign hurt and victimhood when someone describes you using the same term smacks of the rankest hypocrisy and the most outrageous chutzpah.

And yet she seems to have got away with it. I’ve read not a single article in the mainstream media calling her out on her ugly, devious, cry-bullying behaviour. Here is a powerful, senior public servant on a salary in excess of £200,000 blatantly playing the sexism card in order to avoid being held accountable by the public she is supposed to serve. There was nothing unreasonable or rude about Robinson’s question, which was couched cautiously and somewhat nervously. Davies did the dirty on him. No BBC interviewer wants to be accused of “sexism” in this age of the (pretend) gender pay gap and of post #MeToo hysteria. It was a low down devious trick to shut down the debate and it worked.

According to a report last year by the Taxpayers’ Alliance, there are now 266 public health officials on salaries in excess of £100,000, all funded by you, the taxpayer.

The ten best-paid ones — including Sally Davies — are on salaries in excess of £200,000, more than the Prime Minister earns.

So what do we, the public, get in return for all our largesse to these bansturbatory control freaks?

More rules, more regulations, higher prices, more restrictions on what used to be known as “lifestyle choices”. (Increasingly, it seems that the State wants to do all the choosing for us).

At best these rules are intrusive and pointless; at worst, counterproductive or otherwise damaging.

For example, all “plain” packaging has done — apart from making cigarette packets unspeakably ugly and killing one of the advertising industry’s more creative lines — is to fuel the black market. If there has been any reduction in smoking it has been largely the result of the thing public health officials most loathe and fear: the free market. The development of vaping has done far, far more to wean smokers off tobacco than anything the likes of Sally Davies have done in their meddling careers.

Then there’s another of my bugbears, the sugar tax pushed by Jamie Oliver and implemented by Davos Man Chancellor George Osborne. What did it achieve? Mainly, it destroyed the taste of classic fizzy drinks Lucozade, Irn Bru, and San Pellegrino — all of which disastrously altered their formulae in a misguided attempt to avoid commercial damage to their product.

But the story gets worse. Much worse.

Dame Sally Davies has a new job. And guess what it is?

Why, she has only gone and been appointed Master of the grandest college at Cambridge University.

Gosh. What possible reason could it be that this drearily right on, female quangocrat, no doubt instilled in the progressive values of Common Purpose, got the plummest of plum jobs in academe?

Was it her intellectual prowess? Was it the conversational skills and charm which will no doubt make the hours fly by for everyone sitting next to her at High Table formal dinners?

I doubt it somehow, really I do. But hey, what would I know? I’m just one of those reactionary sexist pigs who thinks that if Oxbridge is to retain its credibility as the apogee of higher education, it really needs to appoint the very brightest and the best, regardless of their politics or gender.