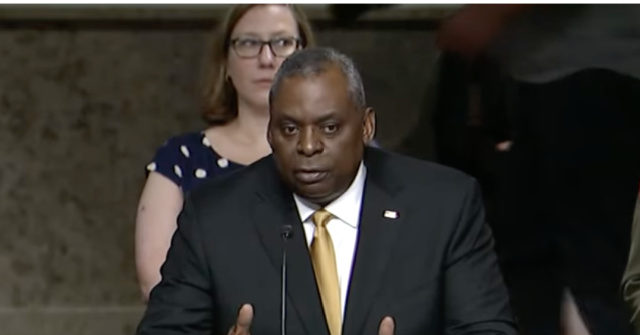 Defense Secretary Lloyd Austin on Thursday said although he did not think the military is “fundamentally racist,” there is a focus on “diversity, equity, and inclusion.”

Cotton said he and Rep. Dan Crenshaw (R-TX) have received “several hundred” such complaints about the Pentagon’s extremist and diversity training, which Austin ordered earlier this year.

Cotton said one Marine told them that a “military history training session was replaced with mandatory training on police brutality, white privilege, and systemic racism,” and that several officers are now leaving his unit because of that training.

He said another service member told them their unit was required to read “White Fragility” by Robin DiAngelo which claims, “white people raised in Western society are conditioned into a white supremacist world view.”

Another complaint they received is from a member of the special operations community who said they have been told, “The U.S. Special Operations Community is racist.” An Army officer told them that his general officer told him the entire Army is racist.

And one airman told them their unit was forced into a racist exercise called a “privilege walk” where members of the wing were ordered to separate themselves by race and gender in order to stratify people based on their perceived privilege.

Cotton said: “Soldiers have come forward to tell us that they have been forced to watch videos about systemic racism and documentaries that rewrite America’s history as a fundamentally racist and evil nation.” Cotton added:

Mr. Secretary, we’re hearing reports of plummeting morale, growing mistrust between the races and the sexes where none existed just six months ago, and unexpected separations and retirements based on these trainings alone. And again, these are not my words these are the words of your own troops.

Austin said he did not believe the military is a fundamentally racist organization or that anyone in the military should be treated differently based on their skin color or sex, adding, “That is why we have Diversity, Equity, and Inclusion focus in the military.”

Austin also said he would recommend that service members report to their command or to the inspector general when they are subjected to trainings that draw on critical race concepts, such as that America or its military is inherently racist or that certain races are inherently privileged or victimized. He added:

I would also say that Diversity, Equity, and Inclusion is important to this military now and it will be important in the future. We are going to make sure our military looks like America and that our leadership looks like what’s in the ranks of the military.

Cotton closed out his questioning with: “This is not about diversity in general, though. This is about a very specific kind of anti-American indoctrination that is seeping in to some parts of our military based on the whistleblower complaints we have received.”

After the hearing, Cotton said in a statement, “Secretary Austin and I agree that core tenets of Critical Race Theory have no place in our military, which must remain an institution that welcomes patriotic citizens of every race and background.”

“I want to echo the Secretary’s comment that servicemembers who encounter any anti-American beliefs, or training which singles out troops based on the color of their skin, or teaches that one race discriminates while others do not, or that America or the military is a fundamentally racist place, or that one race is inherently privileged while others are inherently oppressed, ought to report them up the chain of command, the Inspector General, or directly to me through the whistleblower website hosted by Congressman Crenshaw,” he added.