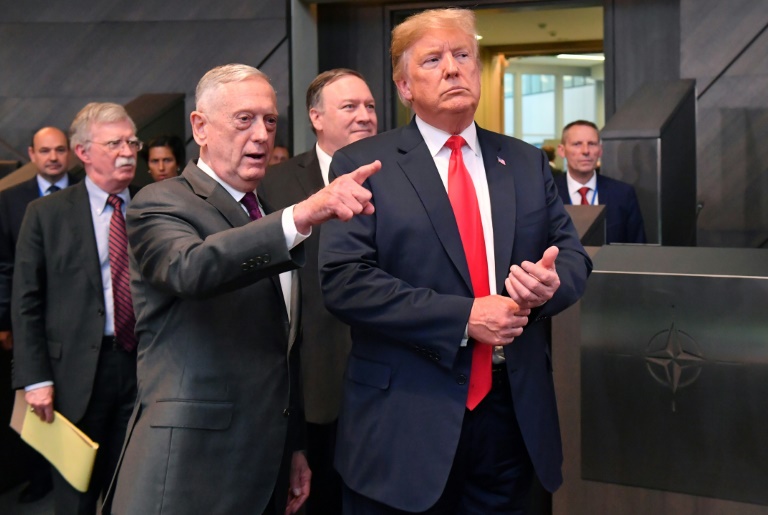 Defense Secretary Jim Mattis on Monday dismissed rampant media speculation of his leaving the administration, after President Trump was asked about the topic on a recent 60 Minutes interview.

“I’m on his team,” Mattis said en route to Vietnam. “We have never talked about me leaving. And as you can see right here, we’re on our way. We just continue doing our job.”

Media speculation on Mattis’s tenure kicked into overdrive after 60 Minutes host Lesley Stahl on Sunday asked if Mattis was “going to leave.”

Trump replied, “Well, I don’t know. He hasn’t told me that. I have a very good relationship with him. It could be that he is. I think he’s sort of a Democrat, if you want to know the truth. But General Mattis is a good guy. We get along very well. He may leave. I mean, at some point, everybody leaves. Everybody. People leave. That’s Washington.”

Mattis said he thought “nothing at all” about Trump’s comments — which some in the media have argued was an insult.

He also said he has never registered with any political party, and that as a U.S. Marine, he has served both Republican and Democratic presidents.

“When I was 18, I joined the Marine Corps, and in the U.S. military we are proudly apolitical. By that, I mean that in our duties, we were brought up to obey the elected commander in chief, whoever that is. And we’ve seen, over those — since I was in the military longer than some of you have been alive, I have seen Republicans and Democrats come and go.

“Where am I today? I’m a member of the president’s administration. And you have seen that President Trump’s military policies, security policies, reaping significant bipartisan support,” he said.

He also took a jab at the media.

“I realize you all write about tension between this person and that, this administration and that party, and this sort of thing. But when you think 83 percent of the U.S. Congress voting the same way on an issue put forward by the Republican president, you can see that my portfolio is bipartisan by its very basis, and that is the protection of the United States,” he said.

“That’s what President Trump has told me to do, and I eagerly carry that out, alongside probably the most selfless young men and women — not all young; some old men and women, too — civilian and military, Army, Navy, Air Force, Marines working together. So that’s where I stand. That defines me.”