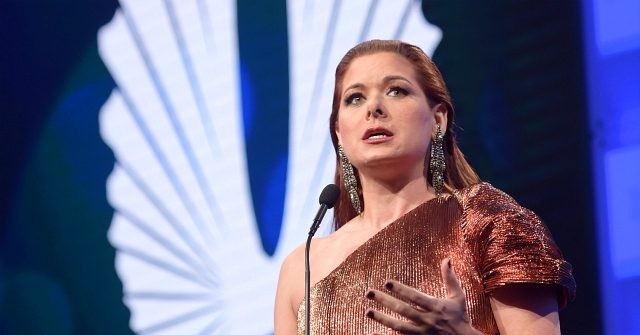 The former Will & Grace star, who, a year ago, endorsed Joe Biden for president because he’s a “unifier, said it was “brazen” and “disgusting” for Georgia’s state representatives to try and take away Delta’s tax break. Messing’s missive came in a tweet reply to a post by Washington Post columnist Greg Sargent’s report on the tax break bill.

Messing concluded that “The @gop in #Georgia need to be arrested.”

THIS IS SO BRAZEN. It’s disgusting. The @gop in #Georgia need to be arrested. https://t.co/NMg1aVZ5XI

Debra Messing has dedicated much of her Twitter feed to re-tweeting messages by leftists decrying the so-called “voter suppression” bills being passed in state legislatures across the country.

Georgia and Texas have passed bills mandating photo identification for those wishing to vote, and eliminating ballot drop boxes. Georgia’s voter integrity law has taken the brunt of attacks from the left, with a firehose stream of mischaracterizations of what is in the law.

Messing has joined other liberals in handwringing over the fact that more than 300 bills targeting the election irregularities in 2020 have been introduced in legislatures across the country.

Ending the filibuster has never been more important than it is right now. Find out why in this episode with Adam Jentleson. #EndTheFilibuster https://t.co/KdwHYgGEMc