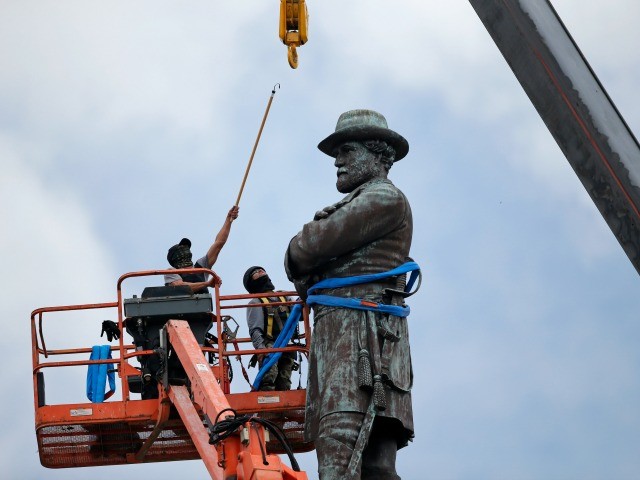 Retired U.S. Army General and former CIA Director David Petraeus on Tuesday called for the removal of the names of Confederate figures from military bases nationwide.

Petraeus wrote in an op-ed for The Atlantic that “It is time to remove the names of traitors like Benning and Bragg from our country’s most important military installation,” a reference to bases named after Gen. Henry Benning in Columbus, Georgia, and Gen. Braxton Bragg in Cumberland County, North Carolina.

It gives me considerable pause, for example, to note that my alma mater, West Point, honors Robert E. Lee with a gate, a road, an entire housing area, and a barracks, the last of which was built during the 1960s. A portrait of Lee with an enslaved person adorns a wall of the cadet library, the counterpoint to a portrait of Grant, his Civil War nemesis, on a nearby wall.

We do not live in a country to which Braxton Bragg, Henry L. Benning, or Robert E. Lee can serve as an inspiration. Acknowledging this fact is imperative. Should it fail to do so, the Army, which prides itself on leading the way in perilous times, will be left to fight a rearguard action against a more inclusive American future, one that fulfills the nation’s founding promise.

Petraeus’s remarks come after the U.S. Marine Corps ordered the removal of all Confederate paraphernalia from Marine bases around the world.

The Friday statement from the U.S. Marine Corps read:

The statue, which sits on state property, will move to storage while Northam’s administration works “with the community to determine its future,” the governor said at a news conference where the announcement was met with extended applause.

Northam made the decision after days of angry protests in Richmond and across the country over the death of George Floyd, a black man who died after a white police officer pressed a knee into his neck while he pleaded for air.

“You see, in Virginia, we no longer preach a false version of history. One that pretends the Civil War was about ‘state rights’ and not the evils of slavery. No one believes that any longer,” Northam said.

The decision came a day after Richmond’s mayor, Levar Stoney, announced he will seek to remove the other four Confederate statues along Monument Avenue, a prestigious residential street and National Historic Landmark district.

The AP contributed to this report.