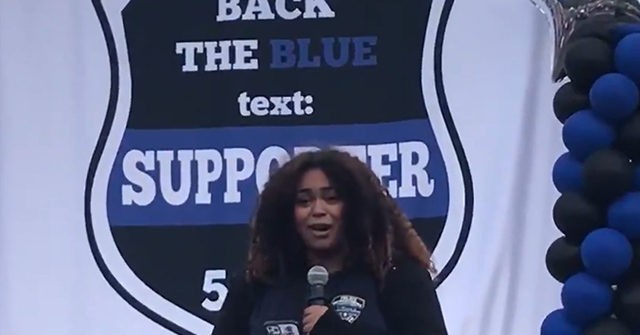 On Sunday, October 4, 2020, Genesis Familia spoke in honor of her mother, an NYPD officer whom she says was shot dead “just for the blue uniform that she wore.”

ABC 7 NY reported that 48-year-old Miosotis Familia was shot on July 5, 2017, “while sitting in a mobile command unit.”

Other officers closed in on the gunman and killed him.

Genesis took part in a Back the Blue rally on Long Island Sunday, speaking through tears as she remembered her mother and her mother’s commitment to use her job as an officer for a positive good.

“My mom, like every other police officer on the job, who sacrifices so much time from their friends and their families to protect all New Yorkers, put her life on the line every day to make New York City a better place,” she said.

Genesis added, “She was taken from me and those that loved her just for the blue uniform that she wore.”

She tied the horrific 2017 attack on her mother with the numerous attacks on police in 2020, noting that the “violent attacks that have been taking place around the country on innocent police officers are because of their uniform, just how my mother was targeted for her uniform.”

Genesis Familia, daughter of hero PO Miosotis Familia, spoke about her mother today and the sacrifice that she made to hundreds of supporters at the Back the Blue rally on Long Island this afternoon. Her words should be heard by all NYers about the sacrifices our cops make. pic.twitter.com/WKy9NYNSUx

Genesis used her speech to draw attention to the sacrifices officers make: “I just want all Americans to remember that these cops out here, protecting and serving the communities that they do every single day, are human beings with families and loved ones who need them to come home, just how I needed my mom to come home to me that night.”