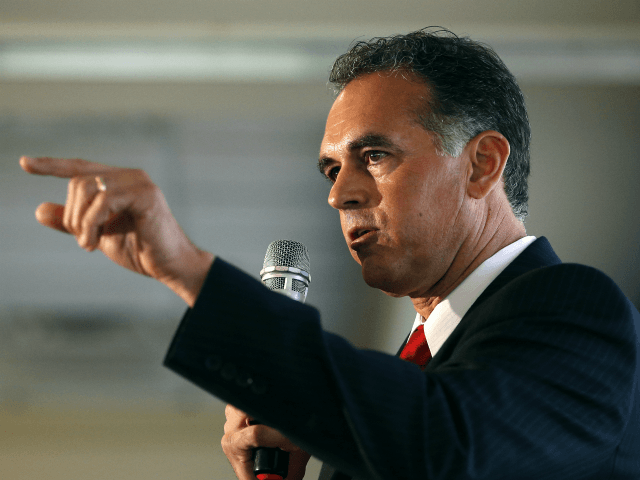 Nevada’s 3rd district is currently represented by Jacky Rosen (D-NV), who was elected to the House in 2016. Rosen is seeking election to the Senate in November. Tarkanian’s Democrat opponent is Susie Lee.

“I believe very strongly in what President Trump has done on the economic front,” said Tarkanian. “[He is] eliminating the burdensome and unreasonable regulations, making the tax system fair, fairer not only for the businesses but for also for individuals.

He added, “I also believe in a lot of the thing he’s doing on the tariff side. We don’t want to see more tariffs imposed in a war, but we are paying much more in tariffs than the other countries that we trade with, and it’s unfair.

Tarkanian continued, “We put American businesses and American workers at a huge disadvantage. I’m hoping that President Trump’s strong negotiation skills will help eliminate the tariffs and put us on a level playing field.”

“I don’t believe we should be going overseas and fighting wars unless there’s an imminent threat to our national security, or that of our close allies,” stated Tarkanian.

“We shouldn’t be going overseas and nation-building. We spent three trillion dollars in the Middle East, right now, where that money could have been used to take care of our veterans, first and foremost, who’ve been over there fighting, but also take care of the people that need help here in the United States instead of wasting it overseas,” assessed Tarkanian.

Tarkanian highlighted his ongoing support for then-presidential candidate Donald Trump before and after NBC and the Washington Post coordinated to release the “Access Hollywood tape” weeks before 2016’s presidential election.

Tarkanian said, “I was a MAGA candidate first, when nobody else was in Nevada. I was the only federal candidate that supported candidate Trump until the end of the last election, all of our other top elected officials — our governors, senators, senate candidates, congressmen — they all came out and demanded Trump step out as a nominee when that [Hollywood Access] tape came out.

Tarkanian went on, “I’m the only person who supported candidate Trump at the time, because I believe very strongly in those MAGA principles and we see how they’re working, now.”

He finished by noting his opponent’s unwillingness to participate in future debates.