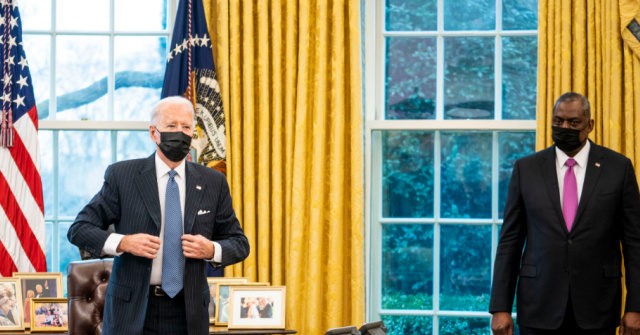 House Minority Leader Kevin McCarthy (R-CA) on Monday evening called for the politicization of the United States military under President Joe Biden to “stop now,” after a series of political controversies erupted over the last several days.

“.@DeptofDefense is being politicized. Uniformed service members recently criticized a private citizen for his First Amendment rights, & today a Dem lawmaker used soldiers in a political stunt against a GOP member. @SecDef Austin—This sets a dangerous precedent. It must stop now,” he tweeted.

.@DeptofDefense is being politicized. Uniformed service members recently criticized a private citizen for his First Amendment rights, & today a Dem lawmaker used soldiers in a political stunt against a GOP member.@SecDef Austin—This sets a dangerous precedent. It must stop now.

A handful of other Republicans have also criticized the military’s involvement in politics.

Their rebukes came after a number of Army and Marine Corps generals and senior military leaders slammed conservative talk show host Tucker Carlson on social media after he criticized President Joe Biden’s focus on making the military more “feminized” while China was focused on making its future forces more masculine.

The senior military leaders mocked and, in some cases, issued threats at Carlson, implying that he could not comment on the military if he did not serve, which undermined the long-held American tradition of civilian rule and oversight of the military.

Indeed, members of Congress had to approve a waiver for Austin — a retired Army general — to become defense secretary since he had not spent more than seven years out of uniform as required by law. Austin reassured members of Congress that he understood the principle of civilian leadership of the military in order to be granted the waiver to serve as Biden’s defense secretary.

Conservative pundits and journalists noted after the senior leaders’ attacks that the military has never similarly come out against any member of the media like that — despite worse criticisms of human rights violations.

The Federalist’s Patrick Swan, himself an Army veteran, wrote in an article that progressive show host Rachel Maddow called the use of the National Guard to help quell riots last summer the “death of the Republic,” but did not face any rebuke from the Pentagon.

Sen. Ted Cruz (R-TX) on Sunday wrote a letter to Austin addressing the attacks on Carlson and requested to meet with the Marine Corps Commandant, since one of its accounts had not only attacked Carlson, but also a civilian who suggested the service focus on China and not Carlson.

Some leaders walked back their comments and claimed they were not political statements. The Marine Corps Twitter account in question deleted its tweets after Cruz’s letter to Austin.

However, on Monday, another controversy erupted.

Greene was not in her office, but San Nicolas asked her staffer to come out and greet the Guard members.

Conservative pundits slammed the stunt, noting that if a Republican lawmaker had done that to a Democrat politician during the Trump administration, there would be outrage from the establishment press over having members of the military participate in a political stunt while in uniform.