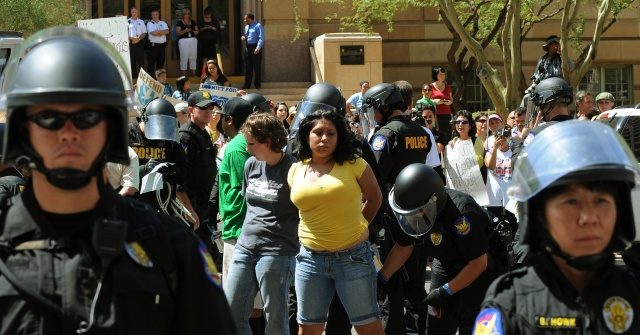 At least three illegal aliens shielded from deportation by President Obama’s Deferred Action for Childhood Arrivals (DACA) program have been arrested, among hundreds, in riots taking place in Phoenix, Arizona.

While at protests in Phoenix this past weekend, three DACA illegal aliens were arrested by police, according to arrest records obtained by ABC 15. An attorney for one of the illegal aliens arrested at the protests refutes police allegations that her client was taking part in rioting and looting.

“Maxima was engaging in legal observation at the protest to make sure people’s rights were protected,” the illegal alien’s attorney told ABC 15.

“[The charges are] completely false She didn’t engage in any rioting nor did the vast majority of people that were arrested, and in all of the cases the judge found no probable cause for the charge that was levied against them,” the attorney said.

The three DACA illegal aliens were among more than 200 people arrested in Phoenix riots in recent days as protests over the death of George Floyd leave American cities wrecked and looted.

Those arrested in the Pheonix riots have been charged with rioting, violating curfew, disorderly conduct, and unlawful assembly.

Today, there are nearly 800,000 DACA illegal aliens living in the U.S. and another more than two million illegal aliens who would be eligible for a DACA amnesty if it were passed into law. Since DACA’s inception, more than 2,100 recipients of the program have been kicked off because they were found to either be criminals or gang members.