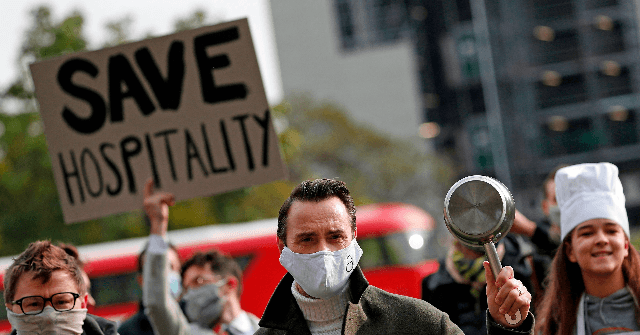 Customers at pubs, cafes, and restaurants will all be forced to sign in when hospitality venues are finally allowed to reopen for outdoor service from April 12th, it has been revealed, in a move that has upset the struggling businesses.

Before they were shut down, pubs and other hospitality businesses in England only had to acquire the signature of one member of a given group of customers for tracing purposes, but the rules will be even stricter when they are allowed to partially reopen later this month — with indoor payments possibly banned, as well.

The uncertainty over indoor payments is a cause of particular concern, leaving open the possibility that rural businesses with poor Internet connectivity may not be able to take card payments at all, according to the BBC.

“Remember to sign into our outside gardens on April 12th… [but] you won’t have to sign in at a Supermarket… Indoors… Hundreds of other people… All touching things, leaning across one another…” remarked publican Adam Brooks.

“I don’t understand why I have to do this in a restaurant or pub, but I don’t need to do this in a supermarket where you have a free for all. People don’t have to sign in and they can pick up fruit with their hands,” concurred accountant Carl Ford in separate comments to the BBC.

Writing to @BorisJohnson alongside @beerandpub & @UKHofficial, we’re outraged by the threat of more impositions on pub businesses.

“We want to trade our way back to prosperity”

Industry bodies UK Hospitality, the British Beer & Pub Association, and the British Institute of Innkeeping warned venues “will already be trading at a loss when they reopen with all the existing restrictions and Covid-secure measures in place”.

“Adding further disproportionate and discriminatory measures threatens the very survival of thousands of businesses,” they said.

The three groups penned a joint letter to Boris Johnson’s government “to express their incredulity at the Government’s stealthy backsliding on pub reopening rules”.

“The review into Covid Status Certification, led by Michael Gove, looks likely to recommend that pubs and other hospitality venues must demand immunity proof from people, to allow them to enter – with the threat of fines for venues if non-compliant. This could prevent millions of young people visiting the pub for months, unless they get themselves tested in advance,” they lamented.

“Government has promised the country that we will be reopening but we are now being told that this will be with our hands tied behind our backs,” the groups said.

In response, a government spokeswoman said: “Public health rules are kept under constant review and we are providing as much flexibility for pubs and other hospitality businesses as possible.

“The roadmap [to reopening] set out that hospitality would open from step two, and removed any requirements for curfews or a substantial meal for customers.”

The spokeswoman appeared to have neatly skipped over the fact the “substantial meal” rules were only scrapped after the government was taken to court over the issue and judges deemed it discriminatory.