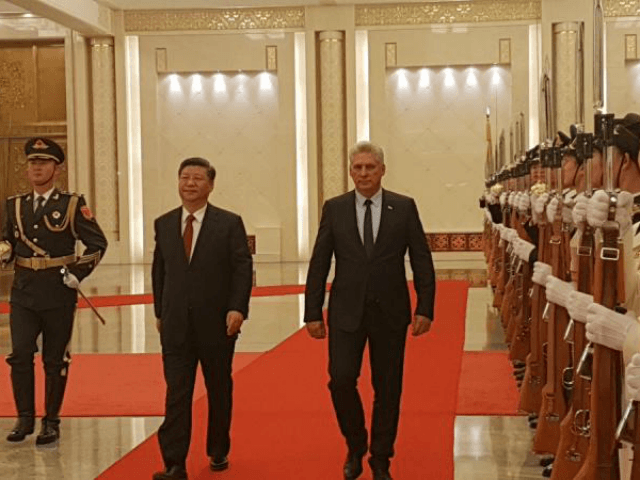 Díaz-Canel is currently concluding a trip to Asia that has so far included stops in Russia and North Korea in addition to Beijing and Shanghai.

After holding a traditional welcoming ceremony for Díaz-Canel at the Great Hall of the People Thursday, the two men held talks after which they signed a series of agreements related to economic cooperation.

One of these agreements is Cuba’s participation in China’s Belt and Road initiative (BRI). Chinese Premier Li Keqiang pledged that China would invest in the Caribbean island, “especially in fields such as new energy, information communication, and biological pharmacy.”

According to Chinese state outlet Global Times, Xi hailed Cuba as a “great country,” declaring that it had “won the respect of the world by insisting on its own development path despite difficulties and obstacles over the past half a century.”

“As socialist countries, China and Cuba are good friends, comrades, and brothers,” he continued. “Chinese people will never forget that Cuba, led by Comrade Fidel Castro, was the first nation in the western hemisphere to forge diplomatic ties with China 58 years ago.”

Xi then went on to “cherish” his meetings with the late Cuban dictator Fidel Castro before calling on the two nations “to double cherish the friendship forged and cultivated by the older generations of leaders, to inherit and develop it and jointly write a new chapter of bilateral friendly cooperation.”

Díaz-Canel, who serves as the country’s ceremonial leader because of the age and ill-health of the Cuban dictator Raúl Castro, said that Cuba “appreciates China’s lasting support and the new generation of Cuban leaders will staunchly continue the traditional friendship with China.”

He added that Cuba “admires the achievements China has scored and highly agrees with the development ideas put forward at the 19th National Congress of the Communist Party of China,” and that Cuba is “willing to learn from China to update its domestic economic and social model and promote the cause of socialist construction.”

Relations between the two countries have been strong since the days of fellow dictators Fidel Castro and Mao Zedong. China is now Cuba’s largest trading partner in terms of goods and services following the economic collapse of Venezuela, largely the product of Cuba colonizing its resources. Reports last year indicated Beijing had started to pull back from the relationship by cutting off key exports after communist-run island defaulted on a number of payments.