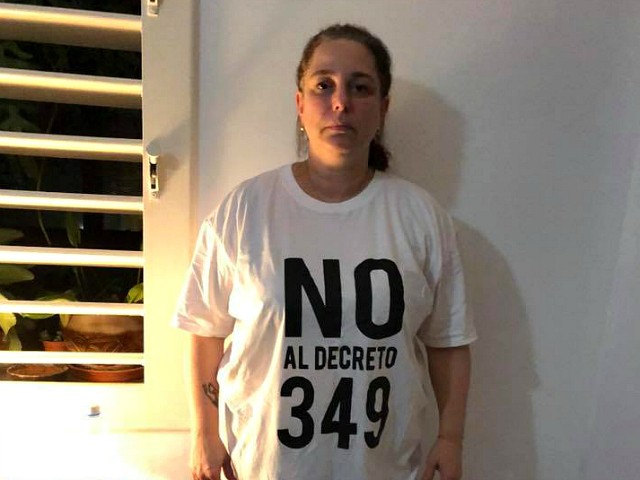 Cuban artist Tania Bruguera was arrested on Monday, along with a cohort of fellow protesters, in front of Havana’s Ministry of Culture headquarters while protesting a new law that bans the creation of music or art without a license from the government.

Bruguera, arrested many times throughout her career for a variety of illegal free speech art installations, told Miami’s Martí news outlet that she has planned to protest in front of the Ministry indefinitely until the government frees all fellow artists arrested for denouncing Decree 359, the law that puts the ban in place.

Cuba has imprisoned a large variety of artists, from materials artists to rappers, for objecting to the decree in public. At least two rappers have begun a hunger strike behind bars demanding their freedom.

Bruguera, Martí reported, was detained for seven hours on Monday along with historian Yanelys Núñez Leyva and fellow protester Luis Manuel Otero Alcántara. The Spanish newspaper Diario de Cuba added the names of artists Amaury Pacheco and Michel Matos to those arrested in front of the Ministry of Culture this weekend and into Monday, and it reported that the government blocked writer Verónica Vega, husband and painter Yasser Castellanos, and poet Javier Morenos from leaving their homes, imposing a form of ad hoc house arrest.

The Castro regime has opted to arbitrarily detain protesters and Cuban dissidents for hours and release them without charging them for a crime rather than turn them into political prisoners, as the latter tends to attract the condemnation of human rights advocates around the world.

Bruguera spoke to Martí after being released, vowing to continue her protests in the name of artists in the minority of those whom the regime charges with a crime and imprisons after sentencing.

Bruguera also posted a photo on Facebook wearing a shirt reading, “no to Decree 349” and stating, “If artists are in prison I cannot enter in a dialogue [with the government] nor will I do anything but express solidarity with them. I’m on my way to MINCULT [the Ministry of Culture].”

Bruguera will reportedly not be alone as her sister called for artists in solidarity with her protest to replace her at the ministry and stand in silent, peaceful protest.

Tania Bruguera rose to international acclaim in 2014 after organizing an art installation titled “Yo Tambien Exijo,” or “I, Too, Demand,” consisting of solely placing a microphone in Havana’s Plaza of the Revolution and urging citizens to take it and speak on whatever they chose for one minute each. The government “disappeared” Bruguera for some months after the stunt.

Bruguera’s arrest is not unique. According to Diario de Cuba, the regime “unleashed a wave of detentions and threats” prior to Monday’s protest to deter participation.

Iris Ruiz, one of those arbitrarily detained, told the newspaper that “every day has been constant repression” against the artists since Friday, November 30. Decree 349 will officially take effect on December 7. “They knocked on our doors to tell us not to allow that anybody go to the sit-in [at the ministry] and that they had already prepared sentences for us,” Ruiz said.

Decree 349 renders illegal the performance or creation of any art that the government is not aware of and does not explicitly support — targeting artists who use at-home recording technology for their music, for example, or painters caught buying materials to work in their homes without asking the government for permission.

The licensing of all art will “strengthen the socialist system and increasingly more competently satisfy the material and cultural needs of society and citizens,” according to the text of the law.

Cuba’s hip-hop community has been among the loudest to protest the decree. Last month, two Cuban rappers — “Pupito en Sy” and “El Osorbo” — launched a hunger strike from prison calling for a repeal of the law. Pupito El Sy was arrested on fraudulent charges of assaulting a police officer, while El Osorbo was arrested for organizing a concert against Decree 349. El Osorbo sewed his mouth shut in prison to protest the law.