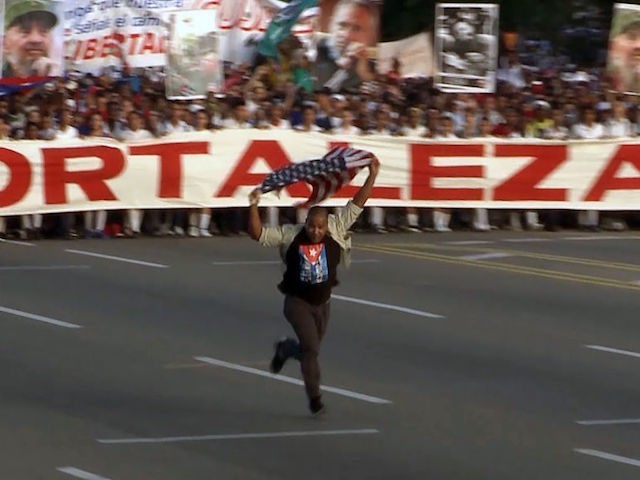 Police arrested Daniel Llorente, a Cuban dissident who spent over a year imprisoned in a psychiatric facility for waving a U.S. flag at the 2017 communist May Day parade, on Sunday after he appeared in the devastated Havana neighborhood of Regla and attempted to provide aid to those affected by this month’s tornado.

Llorente posted a public statement about the arrest on Wednesday on his Facebook page, explaining that police detained him for four hours after he appeared in the neighborhood “to defend the rights of the victims [of the tornado] to receive all the materials necessary so that their homes become better and prettier, as the president of the government of Havana [Reynaldo García Zapata] promised in statements on National Television News.”

Llorente spoke to the national dissident outlet Cubanet following his arrest, reiterating that he had come to Regla to help tornado victims protesting that the Communist Party had not provided them with the aid necessary to survive and rebuild their homes. According to Llorente, the government explicitly banned him from communicating with anyone affected by the tornado after releasing him on Sunday.

“They permanently banned me from visiting affected areas, they told me that I couldn’t speak to any officials and much less the people anymore, that is to say, the victims,” Llorente told Cubanet. “I have been trying to help them, every time I see a state official I go to them and pressure them to give concrete answers … the people know me and know I am on their side.”

Llorente also stated that those seeking aid to rebuild their homes and feed their families gave them a list of their names and contact information before his arrest, hoping he would advocate for them before the law.

Police deemed his attempt at conversing with government officials “harassment” and arrested him, the dissident said, insisting that “counterrevolutionaries” were explicitly banned from coming into contact with tornado victims.

Speaking on video to Cubanet in front of printed photos of U.S. President Donald Trump and Senator Marco Rubio (R-FL), Llorente also detailed that officials told him he must stop speaking openly about the tornado damage or face extended prison time.

“An official threatened me and told me that if I spoke up again, I would go to jail,” Llorente said, quoting the official as saying, “I advise you to shut up and stop talking.”

Llorente, who does not belong to any Cuban dissident group, rose to prominence in 2016 after waving an American flag at the port of Havana to welcome the cruise ship Adonia, the first to dock in Cuba from Florida since the 1959 Revolution. Llorente attracted a crowd with his celebration of the United States and chants of “yes we can,” the campaign slogan of then-President Barack Obama.

A year later, Llorente took his flag to the May Day parade, one of the largest government spectacles of the year. Before the parade started marching, Llorente ran in front of a giant banner reading “Strength is Unity” in red letters and various posters of mass murderer Ernesto “Che” Guevara waving the American flag. Plain-clothes police officers surrounded and publicly beat Llorente, hauling him away by his feet.

Following his arrest, Cuban government officials declared that his public statements of faith in God branded him a mental health patient and moved him to “Mazorra,” a psychiatric institution the Castro regime has used for decades to torture dissidents. At Mazorra, Llorente said he was subject to electroshock and other torture, and never charged with a crime or diagnosed with a mental illness.

The Castro regime freed Llorente shortly after May Day 2018, arresting 18-year-old son Eliécer in late April to ensure he would not attempt to avenge his father with a similar protest act.

“Taking me to a psychiatric hospital, that is a lack of ethics and respect. That is how the system works, repressing anybody who tells the truth,” he said shortly after his release, adding, “Even though people say I am crazy, I reiterate once more, and I want people to know: this is God. God lights my way.”

As a political lightning rod, Llorente’s presence in Regla comes at a particularly sensitive time for the Castro regime, which has seen public outrage soar in the midst of mismanaging the response to tornado damage. The tornado, which hit in late January, has killed six and injured over 100, according to government estimates. Recent reports suggest that nearly 4,000 Havana homes suffered significant damage and 372 homes were completely destroyed. Locals, who have toiled in one of the poorest neighborhoods of the capital for years, fear looting and violence as the promised government aid fails to arrive. Nearly 10,000 Cubans were displaced by the tornado and are functionally homeless.

The Cuban government’s first response to the tornado was to set up kiosks in Regla and sell food to the victims, rather than provide free humanitarian aid. Locals protested that they did not have money for the food, even the cracked eggs and stale chicken and rice offered. With tensions at a breaking point, a video surfaced this weekend of locals forced second-in-command President Miguel Díaz-Canel to flee Regla in his Mercedes-Benz convoy, shouting insults and expletives at him and refusing to appear in Communist Party propaganda. While state media claimed the video was “doctored,” Díaz-Canel himself admitted that the incident did indeed occur.