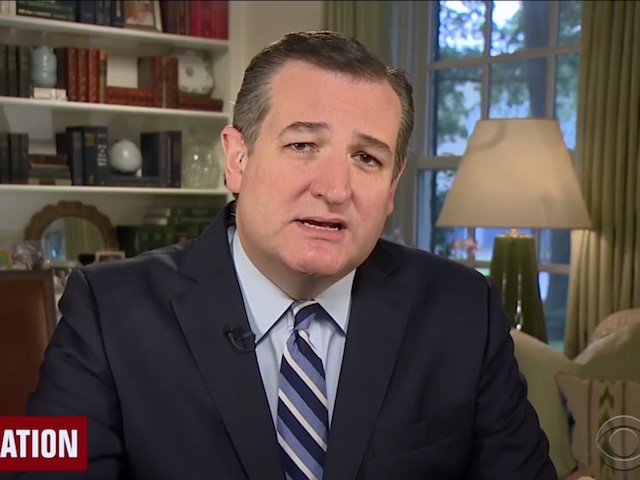 Sunday on CBS’s “Face the Nation,” Sen. Ted Cruz (R-TX) said “under no circumstances” should the so-called migrant caravan be allowed to cross into the United States.

BRENNAN: You were very critical of the Obama administration for taking action via executive fiat as you said, you called it dangerous. This week President Trump on immigration has issued orders bypassing Congress to restrict how migrants crossing the border illegally can claim asylum. Are you OK with that now?

BRENNAN: So I- I don’t hear a clear answer on whether you think this asylum change is OK. Do you think via executive order, it is appropriate for the president to end birthright citizenship, again bypassing Congress?

CRUZ: Well- well- well Margaret as I said on- on the- on the executive order on immigration I have not studied that order yet, it just came out this week. You know I have to admit I- I was kind of busy, we had an election a couple of days ago. And- and- and that- that so, I have not yet reviewed the executive order, and I try on legal decisions – my career has been being a constitutional litigator, so I- I don’t- I don’t reach constitutional opinions lightly. If the order defies the laws of Congress, then yes it’s unconstitutional. If the order constrains and directs how the executive will implement the law then it’s not. Now my understanding is this executive order does things directing resources to the border. Those resources are clearly within the purview of an executive order for the president —

CRUZ: And the president is charged under existing law– The- The president is charged under executive un-under federal law with securing the border, and if the executive order is in furtherance of the statute then it’s not only allowable, it- it- it’s appropriate and good. I mean this so-called migrant caravan of over 10,000 people marching North, declaring their intention to cross the border illegally. I can tell you I told the president just recently when he and I spoke. I said Mr. President under no circumstances should we let them cross, we should use whatever tools are available, whether it is border patrol whether it is National Guard whether- whether it is the military that the president has called up, but we shouldn’t allow 10,000 people to blatantly and deliberately violate the law. There is a right way to come to this country and-, and that’s following the law, waiting in line and following the rules.