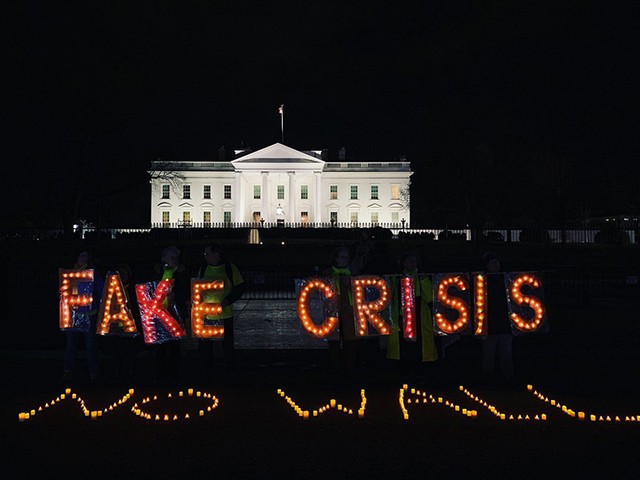 Several photos and a live stream of the protest — led by Kristin Mink, the mother who garnered headlines for confronting then-EPA Administrator Scott Pruitt — were shared on social media prior to the president’s remarks. According to WTOP reporter Alejandro Alvarez, roughly 50 people attended the demonstration.

Handful of protesters out here so far ahead of the #BoycottTrumpPrimeTime event in front of White House.

Right now: @KristinMinkDC is leading a protest against Trump’s 9pm national address. She is seeking #ShutdownStories to say out loud at the event via Twitter.

I’m about to hop off Twitter and livestream the event on the @N2Sreports Fb: https://t.co/j6I8lNTpRc#ShutdownProtest pic.twitter.com/0cLTDmySaZ

Protest getting bigger in front of the White House. @KristinMinkDC tweeted calling on people to gather to distract from @realDonaldTrump’s speech tonight. They’re chanting “no wall, no shutdown.” @fox5dc pic.twitter.com/yaeVLL8a98

Half an hour to go until Trump’s border wall address and about 50 people are outside the north lawn singing “no shutdown, no wall“ and “fake crisis.” pic.twitter.com/SK60mDzFwd

Other signs read “Little Adam Schiff has a green big subpoena” and “Trump is a Dictraitor.”

.@KristinMinkDC, who put this together, just suggested people instead watch “Stormy Daniels fold clothes in her underwear on Instagram live at 9.” Apparently that’s a thing. pic.twitter.com/vuwBoIZPeM

Whether you’re in the White House or on the streets, you’ll get the message.

🚨 If you’d like your #ShutdownStories read at the #ShutdownProtest in front of media and live feeds and used to #DrownOutTrump — tweet it at me!#BoycottTrumpPrimeTime pic.twitter.com/GAILwfHu6L

The protest came together after Mink suggested furloughed government workers should gather outside the White House to protest the president’s address. “Tons of TV cams will be at the WH tonight to air Trump’s factless fear-mongering,” Mink tweeted earlier Tuesday. “Furloughed federal govt workers should meet them there. A huge protest of unpaid govt. workers at the White House would overshadow Trump’s rant & actually reflect reality.”

Tons of TV cams will be at the WH tonight to air Trump’s factless fear-mongering.

Furloughed federal govt workers should meet them there. A huge protest of unpaid govt. workers at the White House would overshadow Trump’s rant & actually reflect reality.#BoycottTrumpPrimeTime

Mink told The Washingtonian that “Kremlin Annex”, an anti-Trump protest that has taken place for 177 days outside the White House, and attracted Hollywood stars such as Rosie O’Donnell, will lend furloughed workers their microphones and other equipment to protest. “People are worried about losing their homes, their cars, their medications. It’s urgent,” Mink told news outlet. “Those are the voices that need to be uplifted. If the press won’t do it on their own, we’ll make them pay attention.”