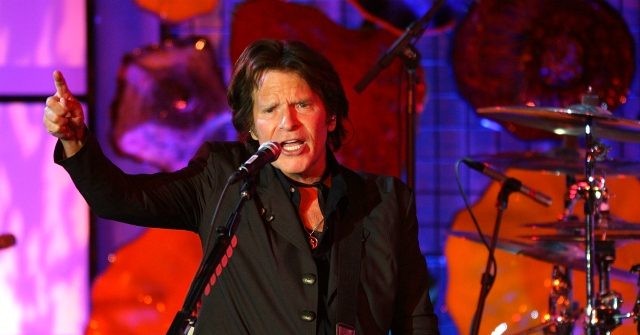 “He is using my words and my voice to portray a message that I do not endorse. Therefore, I am issuing a ‘cease and desist’ order,” said Fogerty in a tweet on Friday.

“I wrote this song because, as a veteran, I was disgusted that some people were allowed to be excluded from serving our country because they had access to political and financial privilege,” continued Fogerty, before going on to lament over “wealthy people not paying their fair share in taxes.”

“The fact that Mr. Trump also fans the flames of hatred, racism and fear while rewriting recent history, is even more reason to be troubled by his use of my song,” added Fogerty.

The rocker’s statement was posted alongside a photo of himself in uniform.

Fogerty joins a litany of musical artists demanding that the Trump campaign stop playing their music at campaign events.

Singer Phil Collins has also hit President Trump with a cease and desist order after his campaign played his hit classic, “In the Air Tonight” at the president’s recent rally in Des Moines, Iowa on Wednesday.

Over the summer, the estate of rocker Tom Petty also complained about President Trump over his campaign’s use of the late singer’s hit song “I Won’t Back Down,” during a campaign rally in Tulsa, Oklahoma.

In 2018, Rihanna and Axl Rose whined about the president using their music at political events, and in 2015, when the president was still a candidate, REM complained about then-candidate Trump using one of their songs at a campaign rally.

These types of reactions by musical artists aren’t limited to the president’s campaign events, as some have even shared their dismay over President Trump doing something as simple as retweeting a video meme containing their music.

In July, rock group Linkin Park forced the removal of a video retweeted by President Trump, citing a copyright claim after it featured their 2000 song “In the End.”