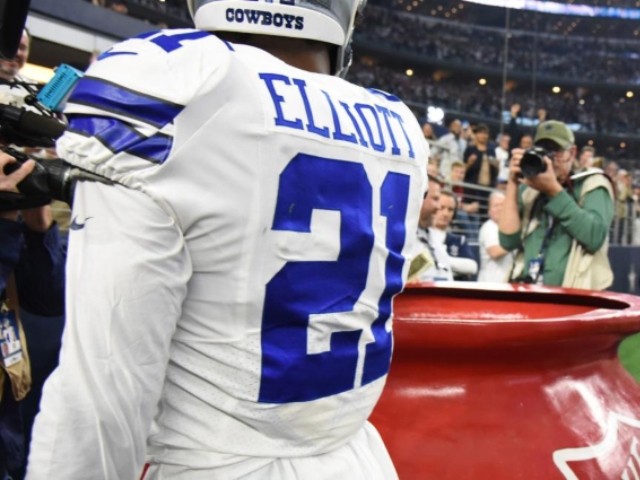 Dec. 6 (UPI) — Dallas Cowboys star Ezekiel Elliott is appealing his $13,369 fine for dropping $21 in a Salvation Army kettle following a score against the Washington Redskins.

“I mean, I didn’t really expect a fine, really don’t care about the fine,” Elliott told reporters. “It’s all for a good cause and we’re trying to bring awareness to the Salvation Army, and if the NFL doesn’t like that, then, I mean, that’s on them. I’ll pay their little fine.”

Elliott also said he plans to appeal the fine. The money from the fine goes to the NFL Player Care Foundation and the Gene Upshaw Players Association’s Players Assistance Trust.

The Thanksgiving Day gift was not Elliott’s first interaction with the big red kettle behind the end zone. Elliott also jumped into it during his rookie season, but he was not fined for that celebration. He donated $21,000 to the charity and watched Salvation Army donations spike.

“A lot of things they [the NFL] do define ridiculous. but that’s not really any of my business, not anything I can change,” Elliott said.

“So I’m just going to keep being focused on this season, focused on leading this team, focused on going out there and winning ballgames.”

The Cowboys superstar has 1,150 yards and six scores on a league-high 240 carries this season. He also has a league-high 293 touches for 1,573 yards from scrimmage.

The Cowboys have an NFC East clash against the Philadelphia Eagles at 4:25 p.m. on Sunday at AT&T Stadium in Arlington, Texas.