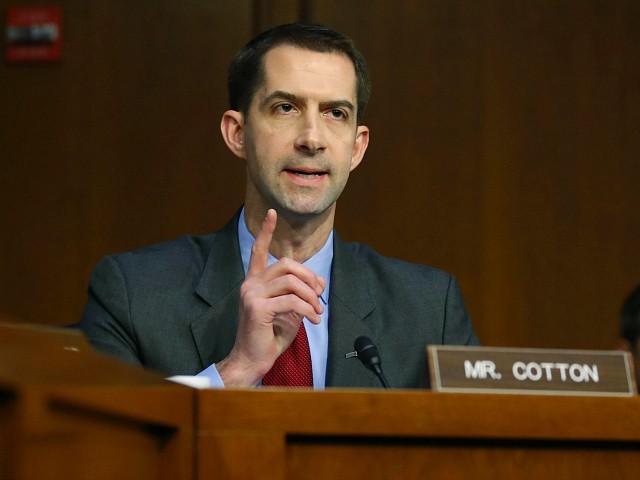 On Tuesday’s “Hugh Hewitt Show,” Senator Tom Cotton (R-AR) argued that some of the statements made by Democratic senators about Supreme Court nominee Judge Brett Kavanaugh “resemble the kind of Stalinist show trials you saw in the Soviet Union,” where making an accusation is enough.

Cotton said, “[T]he Democrats and the media have spent a lot of the last couple of years talking about undermining basic democratic norms. They should look in the mirror. Talk about undermining basic democratic norms of due process and the presumption of innocence. These are things that go back 800 years to the Magna Carta. And the Democrats, like Mazie Hirono or Richard Blumenthal or other senators, are essentially saying that Brett Kavanaugh is guilty simply because he faces an allegation, allegations in the New Yorker article, that are completely unsupported by any evidence and that, by the accuser’s own admission, only came to her after she spent six days working with a former elected Democrat and her lawyer, and allegations from Ms. Ford that are disputed by the four people she claims were in the house at the time what she said happened, happened.”

He added, “Now, she’ll have a chance to present her case on Thursday. But some of the statements by my Democratic colleagues truly, not just resemble McCarthyism, they resemble the kind of Stalinist show trials you saw in the Soviet Union, that merely making an accusation is enough if it’s in the greater interests of the party and the state, as Mazie Hirono essentially said on Jake Tapper’s show on Sunday.”